Tom and John Fogerty, formed a band in El Cerrito, California in the late 1950s, they were called Tommy Fogerty and the Blue Velvets but change their name to the Golliwogs before, Creedence Clearwater Revival (CCR). The line up consisted of Tom Forgery (Rhythm guitarist), younger brother John Forgery ( guitar and vocals), Stu Cook and Doug Clifford. In June 1968, Fantasy launched their first album "Creedence Clearwater Revival", which was a pseudo psychedelic rock album. The single form the album was a cover version of Dale Hawkins old rock standard "Suzie Q."


A follow up single was another cover, this time Screamin' Jay Hawkins' hit "I Put A Spell On You." The single failed to reach the heights of its predecessor. 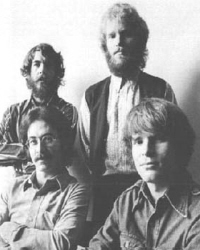 In 1969 they released their second album, "Bayou Country," (1969). This was quite a different class and the single 45 form the album was "Proud Mary"/"Born On The Bayou" which made number 2 in the US and 8 in the UK. Now considered the best white band around their music was a mixture of Southern US, Creole styles, rhythm & blues and rockabilly. CCR performed on the 2nd highest bill at the Woodstock and John Fogerty only improved as a lyricist with the next two albums "Green River" and "Willy & The Poorboys." In 1970 the Band released "Travelin' Band"/"Who'll Stop The Rain" followed by "Up Around The Bend," both sold well. Later that year "Cosmo's Factory," the fifth album went to the #1 position in several countries, including USA, UK and Finland. "Pendulum" was released at the end of the same year but was less well received by the critics although it sold well. In 1971, the single "Have You Ever Seen The Rain"/"Hey Tonight" did well but rumours the band were in conflict grew louder. Until now John Fogerty had written CCR’s material and arranged and produced their studio recording. John also acted as the group’s manager.

Whilst no one could deny his success the others in the group felt stifled artistically and demanded more voice in the way the group was going. Tom Fogerty left in disgust and started a solo career in 1971. The remaining trio released the single "Sweet Hitchhiker," but a year later Creedence Clearwater Revival was officially disbanded. John Fogerty became involved for many years in legal and contractual disputes with his label, Fantasy Records. Tom Fogerty continued his solo career without major commercial success. He died in 1990. The rhythm section of the group, Stu Cook and Doug Clifford, followed pursuits independently and together in Don Harrison Band, Southern Pacific, and Sir Douglas Quintet. In 1995, they comprised a band called Creedence Clearwater Revisited and continue to tour the world performing the songs of Creedence Clearwater Revival.