© Words Barry Cain
It’s time to enter the twilight zone again. Time to renew my acquaintance with public enemy number one, Spanky and his gang. Time to nip round to his place in Gunther Grove and meet the directors of his company.

Whatever happened to the incandescent revolution? Maybe Malcolm McLaren sold it at a profit. Maybe straight bottoms held the shit in too long. Maybe, just maybe, it’s in a kind of splendid hibernation, ready to stretch and pounce on some future crazy kid.

Public Image Limited for one thing.

‘Oh, you’re talking about the Sex Pissups . . .’ John, lost in his huge sofa, spits out the words. ‘There weren’t many songs that band wanted to do. They were such a bunch of arseholes.’ 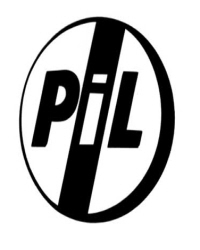 ‘Yeah,’ continues John, ‘they’re only really happy doing "Johnny B. Goode" and cover versions of Everly Brothers’ songs. If I’d have asked them to listen to this,’ indicating the PIL sound on the speakers, ‘they would have gone, "Oooh, that’s a bit heavy, ain’t it, John?" Anyone who expects us to come out with "Cosh The Driver" ditties is in for a big surprise.’

He’s just read a newspaper report that detailed his life as a drug addict. The actual article confusingly said he took ‘smack (cocaine)’ and also mentioned how punk stars fell into a life of drug-taking, ‘smoke, cocaine, sulphate and speed ...’ Damned well informed lot these journalists.

‘The article was merely an excuse to get me on the subject of Sid,’ says John. ‘Contrary to popular opinion, I’ve never taken heroin. Oh, sure, they used to say it was in my eyes and all that shit, but taking that stuff is totally against everything I stand for. I’ll sue.’

‘Sid, eh? Nope. I’m not giving out any sensationalist copy. There’s nothing to say anyway. See, the geezer has always been a failure. He couldn’t play bass and he couldn’t even cope with his image. And as for him being violent . . . He met Nancy when she followed Heartbreakers’ drummer Jerry Nolan over here from New York. He just picked her up and that’s when he started on heroin. Right away she tried to interfere with the Pistols. Y’know.'   He and Jah begin to mimic a ramshackle, nail-across-the-blackboard, feline East Coast voice: ‘"Oooooh, Sid, you’re really good. You’d be soooo much better off without those other guys."’

‘She was a starfucker,’ says John. ‘I spent a year trying to get Sid off his habit. A year. And every time I turned my back he’d start shooting up again, thanks to Nancy. And when he did eventually try and kick it he got hooked on the cure − methadone.’

Would he like to help Sid out of his predicament?

‘If I could help him personally I would. But he’d have to get rid of McLaren for a start and then stop trying to kill himself. I know a few people think I got jealous of Sid grabbing some of the limelight in the States. That’s absolute crap. Steve and Paul never wanted him in the band at all. It was me who got him in. Me. And when we were in America it was Sid and me who decided we didn’t want to get involved with a failed bank robber. McLaren was infuriated and he never even bothered to book hotel rooms for us over there.

‘There was no reason for the Pistols to bust up. No reason at all . . . except for McLaren. Sid agreed with me. Steve and Paul were over-concerned at finding themselves on their own. They were scared of that ’cos they need someone else to do everything for them. They like people telling them what to do. It was all just a nine-to-five job with them − and that’s a contradiction of what the band was all about.

Consequently, whatever Malcolm said, they would do. I spent a lot of time writing lyrics I felt were important and valid. But when I confronted the others with them they’d say, "I don’t think Malc’s gonna like these words, John." How can you run a band like that? As a group we had regular talks about his role. It used to get me down, but at the same time I kept thinking at least the songs were getting out. Getting across to people.

‘And all the time Steve was happy with his Chuck Berry impressions and Paul with his never-sounding-different drumming. It was me who had to bear the brunt of the studio work. They would fuck off leaving me and producer Chris Thomas to listen to the final mixes. Chris trying to make us sound like Roxy Music and me trying to fight it. We were just too limited.’

And there’s me thinking they were a great band. It’s easy to slag off in retrospect but what Rotten feels is unrefined hatred. Are we to assume, then, that he never liked anything the band achieved? ‘I like the good things. I like "Problems". I like "God Save The Queen". I like "Anarchy". Not much else.

‘But what I loathe most of all is being set up, taken for a mug. And that’s exactly what happened. Malcolm would tell me we were banned from playing everywhere and I believed him. It took six months to discover he was lying. At the beginning he was great. It was all so perfect for us to dominate the world. And then he changed. We never saw him from one month to the next. And when we did try to ring him a strange voice at the other end of the phone would say he was in LA or Paris or anywhere.’’

John demanded and received £12,000. He bought the flat with the money. And that, according to him, was all he ever made. 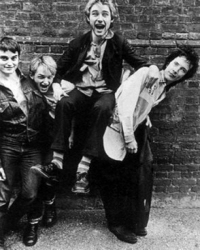 ‘At last I’m not limited to the old ways of doing things,’ he says. ‘At last I find myself in a situation that far surpasses my wildest dreams − I feel totally proud of being in the same band as this bunch of cunts. Christ, it took me so long to realise that these people have always known what I was about. They’re old friends. Friends I’ve known so much longer than the Pistols. Public Image Limited is a collection of friends.’

Ten minutes later we’ve adjourned to the boozer around the corner from John’s place. The girl who wrote the article that John hated walks in, and when she tries to explain how the sub messed around with her original piece, John’s reaction is a peach.

Over a pint he gets real. ‘I never realised the consequences of being a member of the Pistols and talking the way I did. The press had never seen anyone like me before. Never anyone so sensational, so personal, so hateful. Normal situations suddenly became extreme situations.

'But, fuck, as much as people try to put me down at least I’ve done something. Something they’ll never do. People who have attacked me are so, so silly. Now I’ve managed to get myself into the best possible set-up. Now I’m more involved with the way things should be rather than the way things are.

‘This is not Johnny Rotten’s band. If anything, I’m probably the weak link.’

We follow Johnny back to the flat. He’s sprawls out in front of the TV watching The Hustler. Jah and I decide it’s time to split...

A toddle with a Wobble on Chelsea cobbles is an altogether illuminating affair.

His jacket collar upturned, his head submerged, the headless phantom of the King’s Road avoids the pavement cracks and basks in the shadows between the lamplights.

‘Let’s go in here,’ says Wobble, indicating a flash Frenchie establishment custom made for garrulous, three-piece-suit execs with Chicago tapes in their TR7s.

John met Wobble at Kingsway College of Further Education when both enrolled for their O' levels. The two remained firm friends.

‘Do you really wanna know something?’ he asks, over avocado and prawns. ‘This whole thing, Public Image and all, means absolutely nothing to me. Nothing. They put me away, y’know. Put me in a psychiatric ward for cutting up a copper. Said I went a bit mad, they did. Truth is, they’re waiting. Always waiting. Waiting for months, years. Ready to pounce when you crack. Then they’re on you like vultures. Then you’re in the hospital.

‘And that’s only like being on the outside, but more acute. Then they "calm" you down. That means they stick electrodes in your brain and drugs in your arms. I shit myself. I really shit myself. I quietened down. I conformed. You always lose. Nobody . . . nobody’s gonna stick up for you. So I said I was sorry, "sir". If I hadn’t they would have certified me and I’d have been in there for the rest of my life.

Wobble is a twenty-year-old Whitechapel waif into reggae and prawns. He acts as unofficial minder of Public Image.

‘Put this down.’ He picks up my pen, which I’d placed on the table so I could eat my veal, and pushes it into my hand. ‘All these people in the restaurant . . .’ he frantically rubs the top of his head and looks around with psycho-killer eyes ‘. . . are never gonna stick their necks out. They’re all following their little set patterns. Look at them, look at their stupid fucking grins.

‘They’ve watched me bang my head against the wall. All through school − I hope some of those ex-puPiLs are reading this − all my life. I feel impotent. My spirit is gone. Please, please, never let them kill your spirit. Keep stoking the fire of your hatred. That’s all you’ve got left. Let me make myself a martyr. Let me try to break down their huge, indescribable rubber wall. The one that everyone bounces off.

‘See, the rest of the band think they’re going to break it. I know they won’t. They’ll try, try, try. But they’ll fail because the wall is 360 degrees.’

I pay the bill and we leave. There’s no way he’s a new Sid in town. 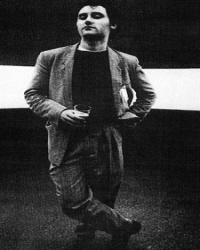 It's all becoming a game. Public Image will obviously succeed but just exactly how long they will last is entirely up to them. The public don't really matter much any more. Like Wobble says, ‘You can sell people bags of shit and they'll be happy.’

Now we're back to the same old shit. And it really doesn't matter.

(John continues to front the Pistols and appear in butter ads on the telly. Jah left the band in 1980. He now runs his own label, 30 Hertz Records, and tours regularly throughout England and Europe with his current band, Jah Wobble & the English Roots Band. He also writes book reviews for the Independent, and his autobiography, Memoirs of a Geezer: Music, Life, Mayhem, was published in 2009. Levene left PIL in 1983 and has continued to release records including the ‘Killer In The Crowd’ EP in 2004. PiL played a few concerts in 2011 and the following year released their first studio album – This Is PiL – in twenty years)

Barry Cain is the founder and editor of the classic 80’s music magazine, Flexipop, which delighted many fans with some amazing free music on a flexi disc. At ZANI we adored The Jam’s alternate version of Boy About Town and Pop Art Poem, classic pop music.