Gene Krupa was born in Chicago, Illinois on January 15, 1909 and was the the youngest of Bartley and Ann Krupa's nine children. His father died when Gene was very young and his mother worked as a milliner to support the family. All of the children had to start working while young, Gene at age eleven. His brother Pete worked at "Brown Music Company", and got Gene a job as chore boy. Gene started out playing sax in grade school but took up drums at age 11 since they were the cheapest item in the music store where he and his brother worked.


"I used to look in their wholesale catalog for a musical instrument - piano, trombone, cornet - I didn't care what it was as long as it was an instrument. The cheapest item was the drums, 16 beans, I think, for a set of Japanese drums; a great high, wide bass drum, with a brass cymbal on it, a wood block and a snare drum."

His parents were very religious and had groomed Gene for the priesthood. He spent his grammar school days at various parochial schools and upon graduation and Rehearsal went to St. Joseph's College for a brief year. Gene's drive to drum was too strong and he gave up the idea of becoming a priest. In 1921, while still in grammar school, Gene joined his first band "The Frivolians." He obtained the drumming seat as a fluke when the regular drummer was sick. The band played during summers in Madison, Wisconsin. Upon entering high school in 1923, Gene became buddies with the "Austin High Gang", which included many musicians which would be on Gene's first recording session; Jimmy McPartland, Jimmy Lannigan, Bud Freeman and Frank Teschemacher. In 1925, Gene began his percussion studies with Roy Knapp, Al Silverman & Ed Straight. Under advice from others, he decided to join the musicians union. "The guy said, 'Make a roll. That's it. Give us 50 bucks. You're In.'" Krupa started his first "legit" playing with Joe Kayser, Thelma Terry and the Benson Orchestra among other commercial bands. A popular hangout for musicians was "The Three Deuces." All of the guys playing in mickey mouse bands would gravitate here afterhours and jam till early in the morning. Gene was able to hone and develop his style playing with other jazz players such as Mezz Mezzrow, Tommy Dorsey, Bix Beiderbecke and Benny Goodman in these local dives. Krupa's big influences during this time were Tubby Hall and Zutty Singleton. The drummer who probably had the greatest influence on Gene in this period was the great Baby Dodds. Dodds' use of press rolls was highly reflected in Gene's playing, especially during his tenure with Benny Goodman. 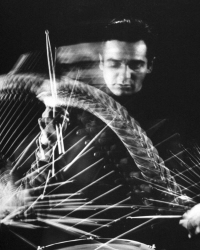 Gene has often been considered to be the first drum "soloist." Drummers usually had been strictly time-keepers or noisemakers, but Krupa interacted with the other musicians and introduced the extended drum solo into jazz. His goal was to support theGene with Avedis Zildjian. other musicians while creating his own role within the group. Gene is also considered the father of the modern drumset since he convinced H.H. Slingerland, of Slingerland Drums, to make tuneable tom-toms. Tom-toms up to that point had "tacked" heads, which left little ability to change the sound. The new drum design was introduced in 1936 and was termed "Seperate Tension Tunable Tom-Toms." Gene was a loyal endorser of Slingerland Drums from 1936 until his death. Krupa was called on by Avedis Zildjian to help with developing the modern hi-hat cymbals. The original hi-hat was called a "low-boy" which was a floor level cymbal setup which was played with the foot. This arrangement made it nearly impossible for stick playing. Gene's first recording session was a historical one. It occured in December of 1927 when he is noted to be the first drummer to record with a bass drum. Krupa, along with rest of the McKenzie-Condon Chicagoans were scheduled to record at OKeh Records in Chicago. OKeh's Tommy Rockwell was apprehensive to record Gene's drums but gave in. Rockwell said "All right, but I'm afraid the bass drum and those tom-toms will knock the needle off the wax and into the street."

Gene moved to New York in 1929 and was recruited by Red Nichols. He, along with Benny Goodman and Glenn Miller, performed in the pit band of the new George Gershwin play "Strike Up the Band." Gene had never learned to read music and "faked" his parts during rehearsals. Glenn Miller assisted him by humming the drum parts until Gene got them down. After "Strike Up the Band" completed in January 1930, Hoagy Carmichael gathered several great musicians together for many historical sessions. Gene played on some legendary "jazz" recordings with Bix Beiderbecke, Adrian Rollini and Joe Venuti.Hollywood Hotel Krupa played in one more pit band with Red Nichols for Gershwin's "Girl Crazy." He then joined Russ Columbo's band in which indirectly led to his joining Benny Goodman's group. Benny Goodman urged Gene to join his band with the promise that it would be a real jazz band. After joining, Benny soon became discouraged with the idea of having a successful jazz group. The band was relegated to playing dance music and Benny was considering packing it in. Upon the band's engagement at the Palomar, Benny decided to go for broke and play their own arrangements. The audience went wild and the band took off. The Goodman group featured Gene prominently in the full orchestra and with the groundbreaking Goodman Trio and Quartet. The Trio is possibly the first working small group which featured black and white musicians. On January 16, 1938, the band was the first "jazz" act to play New York's Carnegie Hall. Gene's classic performance on "Sing Sing Sing" has been heralded as the first extended drum solo in jazz. After the Carnegie Hall performance, tension began to surface between Gene and Benny. Audiences were demanding that Gene be featured in every number and Benny didn't want to lose the spotlight to a sideman.

Gene departed on March 3, 1938 and less than 2 months later formed his own orchestra. His band was an instant success upon it's opening at theThe Band That Swings with Strings Marine Ballroom on the Steel Pier in Atlantic City during April of 1938. His band went through several incarnations during it's existance and at one point even featured a string section with 30 to 40 members. During this time Krupa authored his own book titled "The Gene Krupa Drum Method"(1938) and began an annual Drum Contest(1941). The contest attracted thousands of contestants each year and saw drum legend Louie Bellson as the first year's winner. Gene appeared in several motion pictures including "Some Like it Hot" & "Beat the Band", becoming a sort of matinee idol. His noted likeness to Tyrone Power and musical fame was a magical combination in the eyes of Hollywood. In the summer of 1943, Krupa was arrested in San Francisco in a bogus drug bust. He was charged with possession of marijuana and contributing to the deliquency of a minor. Gene was sentenced to 90 days, of which 84 were served. He was later cleared of the latter charges. During this time, Roy Eldridge led Gene's band and eventually had to break up the group. After Gene got out of jail, he briefly joined up with Benny Goodman and Tommy Dorsey before re-forming his own band. Krupa's groups of the early 1940's were often criticized as being too commercial but Gene's big band was one of the first in the mid-forties to introduce Bop arrangements with the help of Gerry Mulligan and the playing of trumpeter Red Rodney. Gene managed to keep the full band together until December of 1950, when most big bands had already fallen apart. He kept a smaller version of the big band together through 1951.

After breaking up his big band, Gene wasn't sure which direction to take. He had led small groups within his big band during the 40's, this was a logical choice with the growing popularity of be-bop. The Gene Krupa Trio was one of the first acts recruited by Norman Granz for his "Jazz At The Philharmonic" concerts(due to contractual reasons, Gene was first billed as "The Chicago Flash."). The JATP dates introduced the famous "Drum Battles" with Buddy Rich in October of 1952 and the subsequent studio recordings on the Lp "Krupa and Rich" in 1955. Some of the greatest jazz recordings of all time were the result of the "All-Star" jams at JATP. The alumni of these dates included Lester Young, Dizzy Gillespie, Charlie Shavers, Ray Brown, Lionel Hampton, Buddy Rich and of course, Gene. Along with Cozy Cole, Gene formed the Krupa-Cole Drum School in March of 1954. He also began studying tympani with the New York Philharmonic's Saul Goodman(1951). In 1959, actor Sal Mineo portrayed Gene in the motion picture "The Gene Krupa Story." The film was very loose in the facts of Gene's career but did feature an excellent soundtrack recorded by Krupa himself. Gene's huge resurgence in popularity eventually led to his departing the teaching role he had at the Drum School.

By the late fifties Krupa was prompted to slow down due to increasing back problems. He had a heart attack in 1960 which forced him into a retirement for many months. After recuperating, the ever-changing Quartet continued to perform, record and regularly appeared at New York's Metropole. The Goodman Quartet reunited and played several live dates. Gene led a hectic schedule with the Quartet through the early and mid-sixties, performing throughout the US and abroad. His health once again became a problem and his second marriage fell apart. He retired in 1967 proclaiming that "I feel too lousy to play and I know I must sound lousy." During his hiatus, Krupa practiced and coached his baseball team. In 1969, Gene began a series of anti-drug lectures and clinics for Slingerland Drums. He officially came out of retirement in the spring of 1970, re-formed the Quartet and was featured at Hotel Plaza in New York. Gene's last commercial recording was in November of 1972, titled "Jazz At the New School" with Eddie Condon and Wild Bill Davison. Gene's final public performance was with a reunion of the old Goodman Quartet on August 18, 1973. His soloing ability was greatly diminished but his overall playing had become more modern sounding than ever. Gene died October 16, 1973 of a heart attack. He had also been plagued by leukemia and emphysema. He was laid to rest at the Holy Cross Cemetary in Calumet City, Illinois. 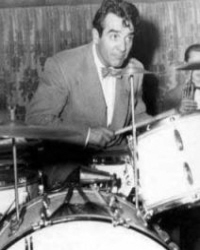 Gene Krupa will forever be known as the man who made drums a solo instrument. He single-handedly made the Slingerland Drum Company a success and inspired millions to become drummers. He also demonstrated a level of showmanship which has not been equaled. Buddy Rich once said that Gene was the "beginning and the end of all jazz drummers." Louie Bellson said of Gene, "He was a wonderful, kind man and a great player. He brought drums to the foreground. He is still a household name."