Many believe his larger than life stage performances were related to Sammy’s secret desire to be liked and to overcome prejudice. He finished his army days in the entertainment section traveling across the US, gorging himself on the joy of being liked. He looked for haters in his audience and gave his performances an extra burst of strength and energy to make them acknowledge him as an entertainer. Back in Civy Street he perfected his performances

in the cheap nightclubs of the major cities. Still with his father and uncle, Sammy incorporated flash dancing and impressions of popular screen stars and singers as well as playing trumpet, drums and singing. All to the delight of his audiences. He made his first recordings with the Capitol label and in 1946 a leading entertainment magazine named him the year's "Most Outstanding New Personality." So when they opened for Mickey Rooney, Sammy’s performances were well polished. He soon progressed to more prestigious clubs including New York's Capitol club, and Ciro's in Hollywood. In 1952, at the invitation of Sinatra, they also played the newly-integrated Copacabana (1954).

After this Decca Records signed Sammy to a contract and Sammy topped the charts with his debut album. In the same year when driving from Las Vegas to Los Angeles Sammy was involved in a dreadful car accident and lost the sight in his left eye. The near death experience had a tremendous influence upon the singer and he began his conversion to Judaism after this friend Eddie Cantor introduced him to his faith. With battered face and eye-patch, Davis made his return to the nightclub circuit. Then in 1956 he made his Broadway debut with Sam Sr. and Will, in Mr. Wonderful, a musical comedy created for him. Sam resumed his film career in 1958 and had his biggest stage success in Porgy and Bess. Sammy became a member of the Rat Pack, (a loose confederation of Sinatra associates) and joined Dean Martin, Peter Lawford and Joey Bishop on stage at the Sands casino in Las Vegas. Films followed with Ocean's Eleven, Sergeants 3 and Robin and the Seven Hoods. In 1964 Sammy returned to Broadway in the long-running Golden Boy, scoring a Tony nomination for his performance. Sam was never far from controversy and upset many Afro Americans by becoming the butt of subtly racist jokes. His earlier conversion to Judaism had also met with considerable controversy but it was his marriage to Swedish starlet May Britt that caused the greatest public outcry. 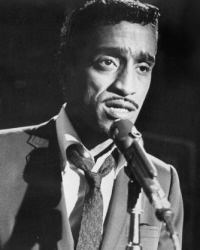 Although Sammy success continued he also received death threats and was prone to cruel racial taunts from Frank and Dean. He started to distance himself from the Pack. A rift developed when Sammy declared himself to be the black Frank Sinatra and Old Blue Eyes was not impressed. Sammy Davis Jr toured Australia several times and performed two concerts at the Sydney Opera House in August, 1977. The shows were recorded by RCA engineers and material was released over three LPs, two by RCA itself and one released by Warner Bros. His last visit was in 1989 with Frank Sinatra and Liza Minnelli. Concerts were held in Sydney and Melbourne and were overwhelmingly received. The event was reportedly the biggest grossing tour ever in the country which would not be that surprising since the ticket prices were the highest yet for any concert in Australia. Recognized throughout much of his career as "the world's greatest living entertainer," Sammy Davis Jr was a remarkably popular and versatile performer equally adept at acting, singing, dancing and impersonations.

Arguably he was the last of a variety artist in the classic tradition. He was also an accomplished actor and won critical acclaim for his appearance in the 1989 film Tap but sadly this was to be his last screen performance. A lifelong smoker, Davis died of cancer on May 16, 1990. Throughout his career he won many awards but I am sure the most prized was the Spingarn Medal for civil rights work in 1968. Let us remember Sammy Davis Jr now with what was to become his signature tune, an unlikely hit in 1972 and taken from the original film Willy Wonks and the Chocolate Factory, "The Candy Man."

Many Thanks for allowing ZANI to reproduce this article -