The Jar Family are from Hartlepool, a tough port town in the North East of England, and it seems that The Jar Family are a collection of musicians from this background.  Stemming from adversity, minimum pay jobs or near homelessness with a bleak future ahead, it seemed the only thing they had was music.

A band with at least five guitarists the mind boggles, how will it work but it does, and it works well.  The sound they have produced is a gritty folk music sound, mixed with blues and that Northern swagger.  The swagger might come from John Cornfield, a talented and successful record producer and sound engineer, who has worked with Cast, Supergrass, Oasis, Muse to name but a few.  Yet, like all great bands, the talent comes from the artists themselves, and additional members help to enhance their sound. 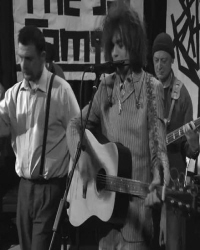 Their second album Jarmalade (which is quite psychedelic sounding to me) is an epic album, well thought out songs, and intelligent usage of their instruments. Opening with Machine (which has been a hit with Robert Elms on BBC London, and played at a number of football stadiums and Formula One Circuits earlier this year), the intro is the sound of a typewriter, then a powerful guitar riff, crisp and strong vocals, the song has many layers leading to an almighty crescendo, and with the typewriter sound as a fade out.  A startling announcement @
In addition, the rest of the album is just as powerful, Moya Moya;  a positive energy of anger,  a track to hit the road with, Sadie; a soul searching number with a wonderful Hammond organ, and well thought out  guitar solos. From these songs and the rest of the album, it is obvious that The Jar Family know their music, and certainly know how to play.  I especially liked Is God My Witness, a gospel meets the blues number, wonderful usage of the harmonica, would be ideal for the ending of a serious type road movie set in the US, with the camera zooming out and the audience are left with only questions, no answers. Furthermore, like a modern day Bob Dylan, they take care with their lyrics as with the above mentioned song.


Is God my Witness?
Does the devil have my soul?
I’m burning on the outside inside feeling pretty cold.
It’s a long way to the 'promised land' such a short step down to hell
Which way am I to go no one can really tell

A lot of songs do conjure up images such as Tell Me Baby, a Bluegrass meet delta blues number. Close your eyes and picture yourself in a makeshift bar in a barn in the deep south US, filled with smoke with moonshine being passed around, as the children of the night swing their hips in time to the music.  Not only is there a traditional folk, blues and rock feel to the album, at times it is ambient and hypnotic which, on first listening, you can’t wait for the next track and then on further listening you will be looking forward to a now familiar track.

I hate to use the word revival, but maybe some youngsters and teenagers forming bands are looking beyond a wall of sound Gibson guitar and Marshall Amp guitar or the classic three chord power pop sound, instead looking at the Blues and folk music as there is a band from Leeds, Pelican Blues, who are all under the age of 19 and citing bands like Humble Pie and  John Mayall Bluesbreakers as their influences, not The Jam or The Clash which makes a change (don’t get me wrong, I love both especially The Jam).  Furthermore,The Jar Family are certainly different from any of the young bands around at the moment, and long may it stay that way, because they have got the look, the sound and the belief to go all the way. For the times they are a-changin'.