Belief Is All - The Jam


These were the last words Paul Weller penned on The Jam's final album "Dig the New Breed", and I fondly recall where I read them for the first time. It was the 8th December 1982 (coincidentally the second anniversary of John Lennon's murder) late afternoon, and I was sitting in a Wimpy bar in the centre of Birmingham with my brother and his girlfriend, killing time whilst waiting for the doors to open to see The Jam at Bingley Hall.


We were not alone, as the Burger Bar was packed with like minded fans, mainly smartly dressed Mods, and I can say with pride I was one of them. As it was the early eighties, pubs would shut between 14.30 to 15.00, to open again at 17.30, so it wasn't just the school kids munching on quarter pounders with cheese, washed down by milkshakes or cola.

It goes without saying, that the main topic of conversation was The Jam. Fans were swapping jokes and anecdotes about the band, and a few had purchased their final album, as copies were being passed from table to table until, somehow, a copy landed on my lap. As I studied the track listing and sleeve notes, which had all three members, Weller, Foxton and Buckler penning their final thoughts on the band, it was Weller's closing sentence that made the most impact on me, and still does to this day.

As I passed the album onto someone else, I gazed upon all the fans, and thought everyone of us, including the band, had been on an amazing journey to reach this point of excitement, reflection and hope. The band gave so much to these people, education, ambition, guidance and principle, as well as music and fashion.

Prior to discovering The Jam in May 1979, I was already an avid reader of novels and poetry, and The Jam enhanced these passions no end. For a start the lyrics were pure poetry, The Jam introduced me to two poetic movements, Adrian Henri (Tonight at Noon from This Is The Modern World Album) and Percy Bysshe Shelley (Back Sleeve Note Sound Effects, with an extract from The Mask of Anarchy), and from this small discovery I started to study the works of The Merseyside poets such as Henri and Romantic poetry (Shelley), which in turn would take me to other poetry movements like The Beat Poets (Ginsberg et al) and new wave poets like John Cooper Clarke, which gave me the confidence to start writing poems, short stories, articles and lyrics, interests that I still hold dear today.

As I was a schoolboy throughout The Jam's career, and school failed to provide me with any real worthwhile knowledge, it was Weller's interviews, be it the NME, Melody Maker or whatever, which became like personal lectures to me. As well as studying his attire, I would read his words for guidance and other cultural reference points. Even though the iconic shoot of Paul Weller reading George Orwell 's 1984 was taken whilst he was in The Style Council, it was from his days as the spokesman of The Jam that he cited Orwell, and resulted in me reading every word that Orwell wrote, leading on to discover the works of Aldous Huxley and Jack London.

I was fortunate enough to have two close friends who shared the same creative spirit inspired by The Jam. You have to remember we were still schoolboys, and we certainly looked our age, so it was sometimes hard for us to attend some gigs and clubs, even with our Mum's permission. For sure, we did the Saturday kids things, by hanging around the town centre, and we tried to form a band (I still play the guitar to this day) it was certainly Weller that inspired me to strum my first chord.

We even invented a role playing game called Mods and Rockers, on a rainy school holiday, which was loosely based on the Dungeons and Dragon's format, where Mods, Skinheads, Rockers, Soul Boys replaced Wizards, Elves, Goblins and instead of a dungeon, it was Brighton or the streets of London. In hindsight, we should have patented the concept, as I am sure we would have been millionaires by now. Yet it was The Jam that helped to enhance our imagination, due to their passion and the intelligent deliverance of their music.

I soon discovered the joys of Motown and Stax, thanks to The Jam's coverage of Wilson Picketts' Midnight Hour, Martha Reeves and The Vandellas' Heat Wave and Arthur Conley's Sweet Soul Music , and was inspired by The Small Faces and, of course, The Action. In 1980 when Edsel released a compilation of all The Action's original UK singles called The Ultimate Action with Weller penning the sleeve notes, that album didn't leave my turn table for months, and then the search began again for more like minded bands of the sixties The Creation, The Eyes and such like.

Due to my family, I had already shaped left wing views, and when I heard songs like Man in The Corner Shop and Eton Rifles, my socialist views developed further, as did my support for the CND. It was a cause that Weller openly supported, and how proud I was to turn up at my school disco in a beret, paisley scarf, wearing eye liner with a CND badge on my Levi denim jacket, while the boots and braces boys and soul boys from school stood back in admiration at my confidence to stand out as different.

Also in times of emotional rescue, The Jam acted as a support to me. I remember having to face the headmaster for a spot of trouble at school. I won't bore you with the details, but the night before my hearing I played The Jam, record after record, and their words and music gave me the strength to face and accept my punishment. 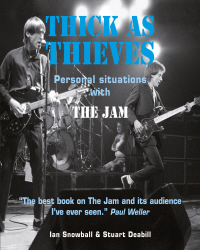 On the surface, The Jam seemed an aggressive alpha male band, yet there was a strong element of sensitivity, intelligence and humanity. Moreover as a Mod , I certainly adopted the different personalities of The Jam, depending on the situation and my mood. But I had better stop here, because I am starting to sound like Jimmy from the sleeve notes of Quadrophenia.

So from being a fan, The Jam certainly helped to create a social, political and psychological foundation for which I have no regrets. Moreover, from the fans I have met over the years, I was not alone with this, as The Jam were much more than a band, they were a guide to a generation, as The Beatles were to their generation. That is how powerful The Jam seemed to us.

Thirty years later, Weller has forged a successful solo career, Foxton is still performing Jam songs with From The Jam which saw Buckler on the drums until he left in September 2009, showing that The Jam have never truly gone away. In addition, fans were delighted to see Bruce and Paul record and play again in 2010, which seemed impossible even in 2009.

As for me, I am now the editor of an online magazine called ZANI, and through other fanzines I have had the pleasure to interview Paul Weller and Rick Buckler, and even pen the sleeve notes for The Jam's greatest hits. I still have the ambition of a young man with ZANI, and the journey so far has been successful, opened many doors of opportunity and made some amazing friends, and the reason why, it's simple "Belief is all"


Thick as Thieves: Personal Situations with The Jam [Paperback] Available on Amazon