The music business is littered with A & R faux pas, the most notable is Dick Rowe's. Dick was the head of A & R at Decca in the 50's and early sixties. He'd made some very good signings, which include Them, The Moody Blues, The Zombies, John Mayall's Bluesbreakers, The Tornados, Tom Jones, The Small Faces, Marmalade, and The Rolling Stones. However, when Brian Epstein turned up in his office and, after a lengthy audition, he turned down The Beatles.


Now I don't really have a problem with this, as it has happened to many well-known artists and groups, including the Who, DP McManus [Elvis Costello], and for some reason Columbia records, didn't want to allow John Hammond to sign a lad from New Jersey called Bruce Spingsteen. However, after turning The Beatles down, Dick explained that, "Guitar groups are on their way out, Mr. Epstein." When I eventually met Dick, it was the first thing he mentioned. Now, if it had a been me, I would have told the world that I signed The Stones, who's career is still going to this day, sod missing out on The Beatles. His comment haunted him for the rest of his life. 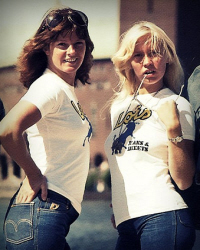 When I joined Polydor's A & R department as their Jazz A & R Manager, I was right down the bottom of the food chain. In 1974, I just happened to be in my boss's office and as my business wasn't important, I was asked to wait, while he finished a discussion with another A & R manager. I sat down and waited and, as I was small fry, they didn't mind me listening in on the conversation. The Swedish arm of the company had signed a group, and their first album had been quite successful in Scandinavia, Belgium, Holland, and South Africa. The title of the album was Ring-A-Ring by a band called ABBA. Polydor UK had an option to pick up the album and the group's future recordings. With the initial success, you would have thought, this decision would have been a shoe-in; however, my erstwhile leader had other ideas and turned them down.

Now, I don't have a problem with him turning down ABBA, but like Dick, his tongue ran away with him, as he then pronounced, "they won't sell records in Europe." At the time, Belgium and Holland weren't a part of Europe. ABBA performed 'Waterloo', at the 1974 Eurovision song contest, and the rest is Pop history. They went on to sell records, not just in Europe, but also all over the world, to the tune of over 300 million records. What was Polydor's big band in 1974, The Rubettes, who after a successful number 1 record, disappeared up the anus of pop history, and ended up playing on the 'chicken-in-a-basket circuit. The 70's were tough years, the three-day week, and Polydor struggled throughout this decade. Had Polydor picked up the option, it would have changed my life, and everyone else at Polydor.

On the subject of the Eurovision song contest, in 1978, my boss entered my office. He threw a master tape on to my desk and proclaimed, "you've got the Israeli entrant, it's fucking shit." I looked at the tape and the name on the box stated, Izhar Cohen, and the tune was 'A-BA-NI-BI'. It was indeed shit, but it won the contest, and went on to be a top twenty hit. I am still mates with my boss, although now, I only bring this up every other year.


Are there any skeleton's in my closet, yes a few, but I'll only recall one. My boss, once again lumbered me, this time it was a band called Visage, which was fronted by Steve Strange and Midge Ure of Ultravox. This was in 1980, and the New Romantic scene was blossoming, something I wasn't in to. I took home a cassette copy of their first album and, as I was spending the week decorating the bathroom, it gave me plenty of time to listen to the album. I played it a couple of times a day and concluded, it was one the worse albums I'd ever heard. Steve couldn't really sing, the backing tracks were dull and boring, and if there was a single on this album, I couldn't hear it. I had to be a bit careful, as Steve's face was the front of every magazine, and Ultravox were regularly in the charts.

The following Monday, one of Visage's manger came in for a meeting, and asked my opinion on what track to go with as the first single. What do I tell him I thought? I snapped back, the first track on side one; most albums have the first hit as the lead track. He smiled and congratulated on my choice, as they too had picked 'Fade to Grey'. The single and album were big hits throughout Europe, and I got a pat on the back. I still think the album stinks, though Steve turned out to be a great guy, and I was glad that for once, I didn't put my size 10's in my mouth.