ABBA first found success at the Eurovision Song Contest February 1974, with their pastiche to the British Glam Rock Sound, Waterloo. An anthemia and melodic pop song with catchy hook line chorus, a wall of sound production and powerful horn sections that penetrated the brain with the harmonious 'Waterloo'.


Never before has an historic battle (Battle of Waterloo 1815) sounded so sexy when sung by the beautiful brunette Anni-Frid Lyngstad and the voluptuous blonde, Agnetha Fältskog backed by Scandinavia 's very own Lennon and McCartney, Benny Andersson keyboards and vocals and Björn Ulvaeus, guitar and vocals.

Andersson and Ulvaeus is a songwriting partnership that is still held in high regard today, spanning over five decades, one less than John and Paul's. Coupled with colourful costumes and the girls fashion silver high boots, ABBA became an overnight success across Europe and a career that lasted right up until 1982. Their music is still going strong, as witnessed with the huge success of the musical Mamma Mia, on stage and film, a musical that uses many of the huge hits of ABBA. 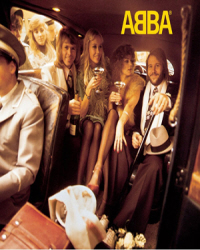 It just happens that Mamma Mia is one of the hit singles from the simply entitled ABBA, as well as an SOS and 'I Do, I Do, I Do, I Do', which has now recently been re-released as a deluxe package, containing a CD of the original album (released April 1975) with three bonus tracks, and a DVD featuring ABBA performances in Australia and BBC archives, along with a 24 page booklet. A real treat for all ABBA fans, old and new. Maybe the deluxe edition can act as an education for the new fans who might think the music of ABBA is the sound track of Sophie Sheridan's life, the central character of the musical Mamma Mia.

From this deluxe box set, you will rediscover the wonders of ABBA, even though the original cover may be a little too decadent for my liking, and a forerunner to the blimp and Cristal champagne culture, yet I suppose they were living the high life, and I won't let it get in the way of enjoying a classic album. Surely a big seller for Christmas.