He could be the king of British Northern Soul, a lost Mod icon, but Graham Dee's air of detached modesty says more about him than either soubriquet. He's just happy to finally see some of his work see the light of day when Acid Jazz released  The Graham Dee Connection: The 60s Collection , rounding up just some of the hundreds of tracks he wrote, recorded and produced in that swinging decade when London was the capital of Cool and Graham rubbed shoulders with its most stellar in-crowd.


'I never thought any of this stuff would see the light of day, I didn't think anyone was interested - just shows you what I know, maybe that's why I never had a hit record!' he says, only half-joking.

These days, Graham revels in pastoral semi-retirement, although he is musically busier than he has been for years. As well as the 60s' set, Acid Jazz has an album of his 1970s' material coming out later in the year, he's writing new material and plays regularly at his Dorset village local.

This late blooming career is a triumph for natural justice. His song, Two Can Make It Together, released in 1969 by Tony and Tandy, has enjoyed cult status for years but its use on a TV advert last year rightly established it as a neglected 60s classic. Slick, sophisticated and defiantly upbeat it now opens The 60s Collection after Acid Jazz set its most tenacious musical archaeologists the task of sifting through Graham's archive of demo recordings, unreleased songs and studio out-takes for the 16 songs that make up the new album.

'They've done an amazing job. Some of these tracks were on old studio acetates that we cut at the time that were unplayable - they were so decayed you could see the metal through the plastic. It's wonderful the technology exists that can breathe new life into them after all these years.' 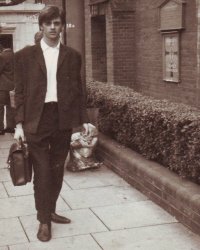 Most of the material comes from Graham's time as an in-house songwriter/producer for the British arm of Atlantic, the legendary American rhythm and blues label. From 1967 to 1970 he wrote and recorded hundreds of songs for artists as diverse as white South African soul singer Sharon Tandy, actor-singer Mike Berry, British crooner Dennis Lotis and US serviceman turned singer James Patterson. Among Graham's most renowned work was with the band The Fleur de Lys.

'They were great guys, should have been much bigger, but I was writing these uptown soulful songs and the British market wanted a much harder, more direct R&B sound. Everyone said I should be working in America so in the end I upped sticks and moved to the States.'

In the early 1970s Graham lived and worked in Los Angeles, Nashville and at the home of southern soul, Muscle Shoals in Alabama. But while his erstwhile songwriting partner Brian Potter went on to enjoy chart success with hits like Keeper of the Castle by The Four Tops, Graham was distracted by his life-long search for an answer to the involuntary twitching that has dogged his life. He lives with a neuromuscular disorder that manifests itself as a series of ticks, twitches and spasms linked to a weakness in his neck. In his late-30s it was diagnosed as a physical form of Tourette's Syndrome (he still contests the hypothesis).

'I was never really into fame, although I wanted to earn a bit of money from what I did. But because of this twitch I have turned down things that could have brought me success - I always imagined people would be focussed on the twitch and not on me. Ironically, having the twitch is what spurred me on in my work, so the very thing that drove me towards success is the same thing that prevented me accepting it.

'Really, I should have just followed the music.'

Graham fell in love with rock 'n' roll at boarding school and started playing guitar after hearing Lonnie Donegan's Rock Island Line. He credits his father not only with buying him his first guitar, but also with placing him on the starting grid for a life in music. Sent away again, this time to a college for the disabled, Graham joined an occasional group playing pub gigs in exchange for scrumpy. There he acquired a taste for booze that took 20 years or more to shake off. He also grew fond of fighting and would lash out at anyone he thought was mocking him.

'I was angry, but it lit a fire in me and I joined a semi-pro band called The Planets playing bass. I was working as a gardener when we had the chance to go to Germany, but the others didn't want to turn pro.'

So Graham left, returned to the guitar and joined singer Steve Arlen, a mainstay on the cabaret club circuit. From there he was drafted into the Laurie Jay Combo who backed visiting American blues stars including John Lee Hooker, Memphis Slim and Gary US Bonds on tour. With his own band, The Quotations, he toured with The Animals accompanying Tommy Tucker, Carl Perkins and Elkie Brooks. He also played for the Walker Brothers and did shows with Tom Jones before joining a club outfit called Bobcats, the house band at London jet-set hang out, the Scotch of St James.

'The Beatles were always in there, they had their own alcove. One night I was so knackered I fell asleep on this leather Chesterfield in the reception and was woken up by George Harrison telling me to get back to work!

'I knew John best of all though and used to see him out around town at gigs and events. I always found him very easy to talk to, easier than a lot of people who weren't as famous as him. The last time I saw him was in 1968 at Heathrow. I was with The Fleur de Lys and we were on our way back from the Montreux Festival in Switzerland. He was behind me walking down the steps off the plane. He said hi and we chatted; he introduced me to Yoko.

'When we got inside he just waved his passport, but I had to queue up to have mine checked. All he had with him was a Polaroid camera, but he got held up and it looked like some customs guy was taking his camera apart. All I had to do was get my guitar and bag and I could walk straight out whereas he had to deal with the hassle. He just said, 'Bye, see you later'. I've often thought that while fame can bring freedom, it's also a trap. He had a face that everyone knows so he was waved through passport control, but then he was trapped. Maybe someone felt they had to search his personal stuff more closely than the rest of us.' 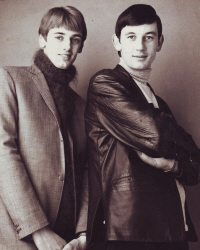 Graham also played with Bobby Tench in one of the many line ups of mid-60s in-crowd regulars, the Gass; was twice hired to join Van Morrison in Them; and briefly filled in for the errant Syd Barrett in The Pink Floyd in 1967. He was a regular on the London session circuit alongside the likes of former Joe Meek drummer Clem Cattini and future Led Zeppelin bassist John Paul Jones. In possibly his best known session Graham played rhythm guitar on the first Small Faces single, Whatcha Gonna Do About It - 'I got the gig because Jimmy Page was unavailable. Back then he was a session guitarist like me, but looking at it now being first call after Jimmy isn't so bad after all.'

Lately he has played various guest slots with the Small Fakers tribute act.

'I really like those guys, great musicians and a cool bunch of people. I never really thought a great deal about the things I've done and the people I've known, so sometimes I find it strange that younger people are so fascinated. But then one guy said to me: 'What it is Graham is that you were there.' I understand it a bit better now, I guess it makes sense.'

Ultimately though, it was in the studio that Graham felt most at home.

'Those were amazing days. I used to go to work each day in Denmark Street, what they called Tin Pan Alley, and on the way I used bang on the door of this old field ambulance that David Bowie and his band, The Manish Boys, used to live in. He was called Davy Jones in those days and they relied on me to wake them up so they could move the ambulance before they got a parking ticket! I would sit and talk for hours with Davy over cups of tea.

'Working in the studio was such a creative time. Don Arden, Sharon Osborne's father, booked me for a weekend session with the soul singer Jerry Butler. I took him around London, but we also did a few acoustic takes - it was the only time he recorded in the UK and I'd love to know what happened to the tapes.'

'I could waste my life thinking about how it could have been different if we'd had a hit, but what's the point? I feel very grateful for everything that's happened and it was a tremendous time. I'm just glad some more songs I really cared about are coming out at last - it feels like back pay!'

Used by Kind Permission of Nick Churchill and Fatea Records