Written by The Editors

Street Sounds is a new mag dedicated to punk, Ska, Mod, Casuals and all aspects of working class culture Issue #1 is out now costing £2 Here is the Mission Statement


Forwards Not Backwards...
Hello and welcome to the very first edition of Street Sounds, a magazine from the arse-end of Britain that celebrates street culture the world over.We're about punk and Ska, football terraces and film sets, Mod, rock, indie, Britpop, books, poetry, comedy, Scooter runs – you name it, if it's got spirit, guts and attitude we're into it.

Street Sounds, in our small way, sets out to be the antidote to the X Factor, and the narrow, suffocating world of Simon Cowell-approved pop-pap. Our attitude has its roots in irreverent rock weeklies like Sounds and long extinct street mags such as Pulped, The End and Sniffin' Glue. We live and breathe for raw, exciting rock, earthy bluebeat, D-I-Y self-starters, fresh views and challenging opinions. 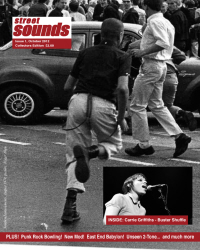 The 'biz' – pop, publishing, TV, radio – is controlled by dead-heads, bread-heads, Yuppies, snobs and accountants. We stand for something else. We're drawing the same line in the sand as Joe Strummer, Lemmy, John Lydon, Poly Styrene, Bon Scott and Jerry Dammers did. But this is not a retro magazine. We tip our titfers to the past, but we're living in the here and now. We are not "counter-culture" either. We're more about the underground mainstream of working class art, music and creativity. We are anti-racist, of course; but that's not about politics, that's basic human decency.

Besides, our music stems from the steamy, sexed-up mixed marriage of the 1950s when black rhythm 'n' blues and white crooning smashed each other up in the glorious racket of rock 'n'roll. We've created this magazine because nobody else would. We want it to be yours. So we want your thoughts, pictures, articles, artwork, cartoons, tips, tattoos, insights, insults and suggestions. Our culture is your culture. Together we can rebuild it. We have the technology. You have the power.
As Argy Bargy sing: We Won't Back Down, We Won't Back Down, We Won't Back
Down...

Make a difference. Kick over the statues!