This week, I received an email from Joe Cardamone of the Icarus Line regarding a new project he has been working on with Annie Hardy from Giant Drag. He included a demo of their song Lake of Fire, stating that "Fleetwood Mac is the new black". The track is fantastic. Joe and Annie have perfectly captured the vibe of Lindsey Buckingham and Stevie Nicks in their pre-Fleetwood Mac days, when they were a folk-rock duo.

Musical partnerships are plentiful, but iconic partnerships are not. If you've not heard the Buckingham Nicks debut release, you really should as it helped define the Pacific coast FM pop sound of Fleetwood Mac. Both Buckingham and Nicks were prodigies of their producer Keith Olsen (a member of Music Machine and early production partner of Curt Boettcher). It was while Olsen was pitching for a job with Mick Fleetwood that he played him the Buckingham Nicks debut. Fleetwood was struck by their track Frozen Love and later invited the pair to join Fleetwood Mac, hence reinventing the band and their sound.
Buckingham introduced the California sound to a struggling Fleetwood Mac and the band ran with it. For me, the lynchpin of Fleetwood Mac wasn't original member Peter Green, who has somehow acquired the genius status of Syd Barrett or Skip Spence. The earlier, bluesier Peter Green recordings lack the essential buzz of Buckingham.

When I first got into Fleetwood Mac it was anathema. If you had to admit to liking them, it was only by praising Peter Green. But man, Rumours! What an album! Stevie Nicks and Lindsey Buckingham were world-class songwriters, and it was shocking the world wasn't listening in 1973. Even the tension between Nicks and Buckingham's romantic and songwriting relationship resulted in many Fleetwood Mac classics: The Chain, Go Your Own Way and Landslide. Their partnership provided the energy behind the epic Rumours – the second Fleetwood Mac album and one of the biggest-selling records of all time – and the focal point of their legendary live shows. 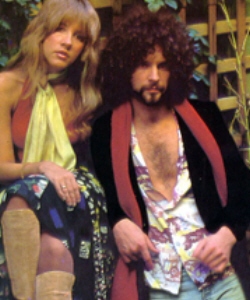 While they were recording the third Fleetwood Mac album, Tusk, Buckingham and Nicks's relationship disintegrated, but somehow this manifested into one of the most wilfully self-destructive albums since the Beastie Boys' Paul's Boutique or Sly and the Family Stone's There's a Riot Going On. Buckingham, now in love with punk and new wave, insisted they record in his house and, although not as successful as Rumours, it was a strange, coke-fuelled masterpiece.

Their influence reaches unlikely places. My friend Nick Laird-Clowes of the Dream Academy had Buckingham brought on as a producer for their second album Remembrance Days in 1987. He recounted how the sessions involved going down to Buckingham's LA mansion, skinning up and playing the Korgis' Everybody's Gotta Learn Sometime.

Courtney Love, of course, worshipped Fleetwood Mac and, in particular, Stevie Nicks. Love was responsible for bringing the band back into the pantheon of cool in the early 90s, which culminated in the classic 1997 Nicks/Love joint interview in Spin magazine.

Love believes fervently that everyone should listen to Rumours before even thinking about picking up a guitar. And she's right. More recently, contemporary bands have been heading towards the Pacific Coast Highway with their music, be it new folk-rocker Nico Georis or even Love's still unreleased classic Nobody's Daughter (which sounds like her Noughties answer to Rumours). In a recent Pitchfork interview, Dave Portner of Animal Collective talked about his email exchanges with Buckingham and how the Fleetwood Mac sound was an influence on their latest album, Merriweather Post Pavilion.

Psychedelic west-coast rockers, Comets On Fire and Six Organs of Admittance have also credited the influence of Buckingham's guitar-style (over that of John Fahey). The more I think about it, Buckingham and Nicks's genius is Zelig-like, and they're seemingly everywhere. Between the guitar style of Buckingham and Nicks's gravely west coast blues voice, it is no wonder during swings and roundabouts of popular culture, music has come back to the Pacific-coast pop of Fleetwood Mac. And with Buckingham's recent statement that he intends to produce another album, plus the fact that the band are currently on the road, could 2009 see another resurgence of Fleetwood Mac? If it can produce another Rumours or Tusk, I say bring it on.