I was driving to London recently from Wales with my daughter. As is usual these days she was hooked into her i pod world. And while sound splashed into her ears there was silence in the rest of the car as I stared eastward willing London ever closer. She suddenly began to sing.


Well not sing, just do that high pitched semi singing people do when they have headphones on, but as she did I could pick out some of the words she was saying. ’You tell me’....’and your bird’....’but you don't get me’.... I quickly thought, ‘she’s singing And your bird can sing!'‘Katie’, I said...nothing, ‘KATIE’, I shouted. She quickly whipped them off and shouted back, angry at being disturbed. It made me laugh, because I recognised my teenage self in her. ‘What are you playing, sweet thing?’She immediately pulled that bored face and looked out of the window. Do I really have to talk to the grown up? it said. She finally answered..'Revolver'.I couldn't help but be impressed, I sat up and looked over my shoulder at her, she cockily returned my gaze.'The Beatles album?''Duh, like, of course you ignoramus'.'Fuckin hell, opp, sorry love, ignore Daddy's swear words, but, do you like that album then?'Again she give that look that says, are you really this stupid?'Umm no I really hate it so that's why I play it all the time'.But then she smiled. She was letting me into her world, and said with that passion we only really have as kids for our favourite music.. 'I think it's the best album ever Dad'.

And that was it. She popped the ear phones back on and went back to The Beatles. I couldn't blame her, after all, she's only twelve, and she'd beaten me by a full two years in discovering one of Pop Music's basic laws....that Revolver by the Beatles is the greatest album in the history of mankind.When I first saw the album I can remember taking a good twenty minutes just looking at the cover. Drawn by their Hamburg friend Klaus Voorman (the boyfriend of Astrid Krishner at the time, before she left him for Stuart Sutcliffe) it catches the Beatles at their most beautiful. These were the children of the war, of rationing, of crooked teeth, cigarettes and bomb sites. They are all hair, chocolate button eyes and razor sharp cheek bones. In 1984, it was closer in time to its recording than I am now to when I received it. It was a different world then. In fact it was much closer to theirs than the one I live in now. You see, you'd often be given albums by older brothers, cousins and friends of cousins. Stuff left in the attic or people just thinking that the days of music and fun were over as they made space for children and the 'grown up world'. My mother said that her friend’s son 'Mark' had left some albums that I could have. Cream's ‘Wheels of Fire’ was in there, The Who's first album, ‘My Generation’ and there, at the bottom, a dog eared 1966 edition of ‘Revolver’. 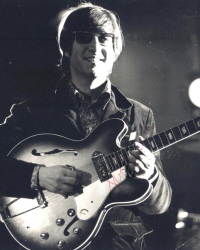 I have to point out I was into the Beatles at this point. The summer before I'd been given a tape, while on school holidays, of the Red Album (a copy of course) and I remember the feedback and riff at the start of ‘I feel Fine’ had tapped straight into my soul. I couldn't explain it but I needed to keep playing it over and over and over. I didn't care about going out, playing football, my mates, even eating. I just had to keep playing these songs. They were like nothing I'd ever heard. Back then in the early 80s the Beatles were spectacularly unfashionable. And their early stuff was dismissed as pap. Honestly. It seems hard to believe now with everyone from Oasis to Weller canonising them and magazines like the Word and Mojo dedicating their entire existence to them but believe you me, it was either The Smiths for the indie kids or U2 for the 'serious' and (worst of all) Heavy Metal for the masses. I tell you, they're trying to say the 80s were decent now, but from the day that Weller broke up the Jam to the Roses first album, it was fuckin’ miserable. An endless parade of electronic awfulness that makes Lady Gaga look like Dylan, and I speak from experience, because I was there. So what could a poor boy do? Well Mick, we could always listen to you when you were great (pre Brian Jones’s death) and of course discover your great 60's rivals and friends...the Beatles.

So that's what I did and suddenly I was trying to get every album. Again in the days before chain  store record shops and the Internet this was no easy thing. I was also from Merthyr Tydfil South Wales. There was no such thing as 'pocket money'. You were lucky if your old man had a job. Thatcher was shutting the pits and steel works for fun and people just didn't have the money to buy books, films and music as they do now. An album was something you saved weeks, maybe months for. Or had for Christmas or your birthday. So can you imagine how I felt as my mother nonchalantly passed over these classic albums? Needless to say I spent a whole week in the bedroom listening to them over and over. But it was Revolver that I instantly recognised as being something special. The magical start of the Scouse drawled '1, 2 cough 3, 4...1, 2, to the astonishing cacophony of sound  that ends ‘Tomorrow Never Knows’, the whole album is (to us an American expression) a trip.There's no doubt that all the Beatles were at their creative nadir making this album. The years on the road had dulled their musicianship live (as Lennon said, we couldn't hear ourselves) so they threw themselves into the studio. We also have to remember how conservative the Abbey Road studios were. Full of men in white coats holding clipboards was how Glyn Johns described it but this was 1966 and things were changing. There was a real breeze of inspiration coming across from the  American West Coast. Yet the Beatles (unlike so many other bands) didn’t panic or try to avoid thisnew sound. Oh no, just the opposite in fact instead they seemed to absorb everything that was  coming from the States at the time, all these new garage psychedelic sounds and by some genius  osmosis give it a British twist. I mean, have a listen to 'She said she said'. You just don't know which way it's going to twist or turn next. The song is like a kite on a spring breeze:  it moves and skitters yet remains utterly tuneful. How the fuck did they do that? Seriously now. How are they the only band that can push a song into places no one had been before yet make it so bloody hummable? It'salmost other worldly and it’s why the world will never see their like again

The album is also a reflection of how they all were as individuals at that point and it seems by some freakish coincidence to dovetail perfectly. (See the ‘White Album’ for when it doesn’t quite do that and instead you can hear the cracks signalling the beginning of the end). Lennon at this point is utterly bored with his life. He later called it his ‘fat Elvis’ phase. Lying in bed until two or sometimes three o’clock in the afternoon he’d become lazy. It’s there in the music. ‘I’m only sleeping’ he tells us, and while everybody (including his Aunt Mini) thinking he’s lazy, he doesn’t mind, after all he thinks they’re crazy. He’d recently done Acid with George, he even tells us about the ‘pop music’ worlds drug dealer of choice ‘Dr Robert’, but much more important than any of that that : he’s suddenly reading lots. And not just anything, proper mind fuck stuff. The Tibetan book of the dead. Then there’s conversations with Peter Fonda about seeing yourself from the afterlife, it’s there in ‘She said she said’. McCartney meanwhile was losing the great love of his life at that point, Jane Asher. It’s beautifully yet tragically caught that awful fracture that a love lost leaves in your heart in songs like For No One and Here There and Everywhere. The melancholy paean to loneliness that is Eleanor Rigby is a simply stunning piece of work for a young working class man in his early 20s. George (always my favourite) has now completely embraced Eastern Philosophy and asked his good friend and master of the Sitar Ravi Shankar to play on ‘Love to You’ a perfect hybrid of Western song structure with a powerful Indian rhythm. George is all over this album; in the bitterly sardonic ‘Taxman’ to ‘I want to tell you’ and what’s wonderful about’ Taxman’ in particular is the capturing of that classic ‘poor lad to suddenly rich’ hatred of taxing, or being taxed. Suddenly we’ve got money and STILL rich people like the government want to take it away. I mean cum ‘ed la?. And finally Ringo. Ringo is the earth for them all on Revolver, the grounded Scouse Rockabilly who finally comes out of his shell and smashes that ride symbol like all his favourite Rock and Roll drummers did. It’s there all over this album, splashing and crashing like a spinning waterfall. In these days of equalising sound to hear him cutting across tracks, really giving it some under the solo’s is just music at its best, at its most human, at its most soulful.

And what’s even better than anything is they weren’t even sticking to any kind of plan (Concept albums came with Pepper). A big Soul stomper? Yep, here's ‘Got to get you into my life’ (a number one for Cliff Benet and the Rebel rousers). What about some Sunny music hall? There you go folks, have ‘Good Day Sunshine’. I’m playing the album as I write this and let me tell you, everything about this album was revolutionary and still is. It hasn't dated in the way the originally much more lauded Sgt. Pepper. And in the same way that Quadrophenia became much more important as the years passed than Tommy, the same happened with Revolver. Without Revolver no ‘All Mod Cons’, no ‘Stone Roses’ no ‘Definitely Maybe’. It's the template for them all. Acid bleached guitars, stomping drums over rubbery bass lines and those gorgeous harmonies. It's the daddy for every skinny guitar band ever since and always will be. Some have come close, the Pistols debut was magnificent, the above mentioned attempts from the Jam, Roses and Oasis. Indeed, The Beach Boys, Cream, the Stones, the Small faces, Stevie Wonder, Bowie, the Smiths, Public Enemy and even Blur have all tried manfully but none have come close to producing something so utterly perfect. It's like Shakespeare in his pomp, its Orson Wells writing Citizen Kane, it's Dickens in 19th Century London, it's the very best Renaissance art. It's perfect. It's Revolver. It’s as my daughter beautifully put it....it’s the best album ever!’