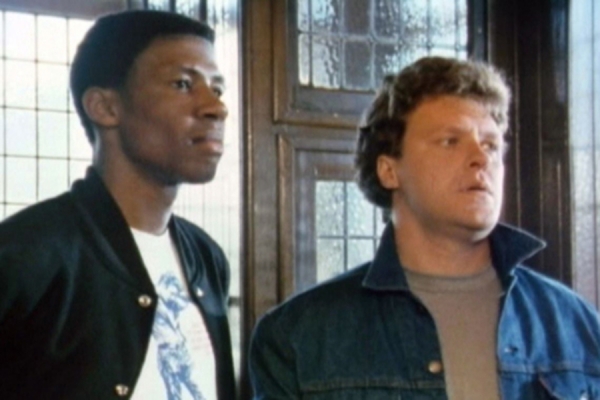 Prospects was a comedy drama originally aired 19th February 1986, which ran for 12 episodes on Channel 4 at 21.00, produced by the recently regenerated Euston Films after a 20 year hiatus. Re- launched in March 2014, with former Eastenders producer Kate Harwood, as the new managing director.


Their productions surely indicate their achievements in becoming a household name, in addition  Euston Films helped to launch the acting careers of John Thaw, Dennis Waterman, Tom Bell and the writing career of Lynda La Plante. So it is safe to say, Euston Films were major players in the world of television and emblematic of British society. Hopefully Harwood can return Euston to its former glory, only time will tell. 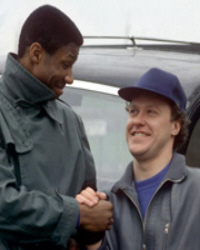 Prospects starts with an aerial shot of the Isle of Dogs, followed by a montage of a young white man (Pincy) and young black white (Bill), with a catchy signature tune “Prospects”  written and performed by former Mungo Jerry front man Ray Dorset, sounding like a Joe Cocker for the eighties, it’s harsh, yet melodic . There are camera shots of the word Prospects written in stylish graffiti on a wall, and as the opening credits come to a close, the wall is knocked down by a crane.  The word Prospects, crumbled, definitely subliminal to the theme of the show.

Pincy is a dreamer with naïve charm and an edge, whilst Bill is more rational and calmer, the lover if you like.  There isn’t anything malicious about these boys, even though they hold their own with the local villains and other characters on the Isle of Dogs, as Pincy’s older brother is in prison for doing burglary, and clearly respected around the neighbourhood.  Yet they don’t want a life of crime (even though they will turn to it, if needs must) Pincy and Bill are  just looking for that one opportunity that will set them up for life, anything with “Prospects”, as the boys keep saying.

There is certainly a lot of ‘ducking’ n ‘diving’ in the series, and you would be forgiven in seeing comparisons to Only Fools and Horses or Minder. Yet when you are down on your luck and living in poverty or border line poverty, you either accept it or look for a way out, the previously mentioned programmes purely emphasise the entrepreneurial spirit which someone from a working class background like Derek Trotter or Arthur Daley possess.

However, it’s not just 12 episodes of their latest scheme, even their schemes are amusing, ranging from Astrologer Dating Agencies, trying to break into a bank’s vault, rat catching, boxing and good old fashioned fly pitching, all highly relevant to the plot. Yet Prospects is about their friendship, the changing face of East London, Thatcherism and the effect on the working class, police brutality, racism, getting by and looking good, even though style doesn’t feature heavily in the show, apart from Bill who often looks sharp.


At the time of production, writer Alan Janes (Original writer for Grange Hill, Jockey School, Z Cars) was intelligent to see the changing world in a then poor borough of London, as in the mid-80s, the Isle of Dogs, under the Conservative government became an Enterprise Zone, an area where economic growth is encouraged. However the development was meant not for the locals, but for large corporate companies and their employees, yet the irony throughout the whole of the series is that Pincy and Bill believe it is also for them. Now, in hindsight, Prospects goes further than a great TV show, as it portrays how the social, political and economic landscape were shifting. So unlike Minder or Fools and Horses,  there is a great deal of social commentary, which is not done by ranting and raving, but good old fashioned comedy, think Laurel and Hardy, Charlie Chaplin, most of their plots centred around poverty and the affect of it. 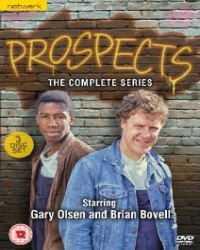 Furthermore, like all great TV shows or films, it’s the actors that make the show.  Olsen (who sadly passed away in 12th September 2000 from cancer, aged only 42) and Bovell are outstanding as their characters, faultless, engaging, offering depth and warmth to Pincy and Bill.  They create empathy, as you are not only rooting for them, you also see yourself in them. Supported by a marvellous range of character actors,  Mona, (Chrissie Cotterill ; Nil by Mouth, Unnovations, May to December), the downtrodden and air hair blonde bombshell who deep down is the love of Pincy’s life , Mickey Smith (Peter Lovstrom; The Meaning of Life, The House of Eliott, Institute Benjamenta, and This Dream That One Calls Human Life) their friend and neighbour, with an eye for the ladies, who often gets caught up in their schemes,  Del The Café Owner (Mike Savage; Grange Hill, The Deceivers, The Fuzz ) who acts as their kind uncle, local African Caribbean villain  Stretch (Eddie Tagoe; Withnail & I, Emery Presents: Legacy of Murder, The Dogs of War) with a booming laugh, the bastard policeman Halforth (Ben Howard; The Fear, Dixon of Dock Green, Big Deal)  who tries and eventually succeeds to arrest the boys.

Prospects  is available on DVD, and remains a cult classic, as it is still an entertaining and uplifting show, and a good indication of life in England in the 80s, and how tough life could be.  There was an opportunity in 1987 for ITV, (who were showing repeats at primetime) to develop Prospects into  major comedy, which in turn would have put  Pincy and Bill up there with Del Boy and Arthur Daley (Please remember the BBC nearly axed Fools and Horses after series three) yet ironically, like these boy’s schemes it had prospects, but with all their best laid plans it failed to materialise, oh well  “Another day, another dollar”,  as Pincy would often say to Bill when met with disappointment, yet they still kept trying.