Baby You've Been Had : a review of "American Hustle"

Dear readers, as I have often expressed to you, I am no film expert. I am only a film enthusiast. When I write my reviews and postings, I am only offering my opinion of the films that I have seen and not truly expressing a "set-in-stone" assessment designed to be the final word. Essentially, you have your opinions and I have mine, no one is inherently right or wrong and that is exactly how it should be. Even so, there are times in which my opinion seems to fall directly against what is seemingly the mass consensus,


either through audiences or critics or both. In the case of Director David O. Russell's "American Hustle," I find myself precisely in that position once again. To all of you who have seen the film and liked or loved it, to the critics who have heaped lavish amounts of praise towards it, to the industry members who will undoubtedly shower this film with awards, to all of you, I have to say, and with all due respect, you have all been had. 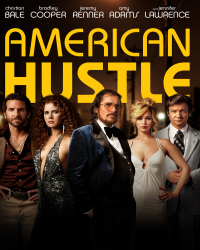 Without mincing words, I hated "American Hustle." I truly HATED this movie. It was a disastrous, terrible, messy, barely conceived project that, like the film's collective of characters, tries desperately to pass itself off as something it most definitely is not--and frankly, seeing it just one day after viewing Martin Scorsese's outstanding, explosive "The Wolf Of Wall Street" made the differences in quality only that much more apparent. It deeply surprised me to feel this way as "American Hustle" had been one of the movies that I have been most anxious to see this season and yet, even after an involving opening section, I found myself becoming numbed and increasingly irritated by the sheer boredom, the inexcusable sluggishness and sloppiness and the incredulous inanity of the material presented to me. I was not drawn in, I was barely entertained and for most of the film, I kept wondering just what in the hell went wrong. To date, and for me and my sensibilities, "American Hustle" represents Russell's worst film to date as well as descending rapidly to resting as one of the worst movies I have seen in 2013.

Now, as previously stated, "American Hustle," which is very loosely based upon the FBI ABSCAM operation during the late 1970's, does indeed begin well and I did like the introduction to Irving Rosenfeld (Christian Bale), a small time businessman and con-artist with an elaborate and most unfortunate comb over who meets and falls for the ravishing red headed beauty Sydney Prosser (Amy Adams), who unbeknownst to Irving, makes her living as a stripper. Irving and Sydney are kindred spirits, as they make their way through the world with their respective facades, but through a pure connection, as well as a shared love of the music of Duke Ellington, they begin a romance. Once Irving confesses to his "outside of the law" excursions, Sydney agrees to join Irving in his pursuits by creating the alluring alias of the British "Lady Edith Greensley," who charms investors into forking over money which Irving soon embezzles.

So far, so good. I was with "American Hustle" through these early sections as Russell did create an effective 1970's druggy haze which did seem to also tie itself to the central theme of perceived yet ultimately false realities. Bale and Adams did also seem to be beginning to create two fascinating characters who desired to escape their respective stations in life through duplicitous means and yet find themselves falling for each other while also being faced with the quandary of whether to reveal their true personalities or not, to each other, and themselves, giving the audience a fine guessing game as to their real motives.

But gradually, the film goes South as we are then introduced to Irving's unstable wife Rosalyn (a completely miscast Jennifer Lawrence), who refuses to divorce him; an over-zealous FBI agent named Richie DiMaso (Bradley Cooper) whose lust for "Lady Edith Greensley" creates a most complicated love triangle between himself, Irving and Sydney and then, there's Carmine Polito (Jeremy Renner), the beloved mayor of Camden, New Jersey who wishes to build jobs in his community through the development of casinos but who runs afoul of that aforementioned over-zealous FBI agent and his own duplicitous desires and then, there's a rouse about an Arab sheikh who wants to make some sort of investments that are either real or false, and then there's the millions of dollars being moved into and out of real or fake accounts, and then, there's the possible entrapment of several members of Congress and then there's...aw who even cares anymore...

My intense frustration and disappointment with the film is not due to what was included or what it was about but entirely how it was about what it was about. Now everything I described within the plot description would be well and good if "American Hustle" had anything approaching a structure, three dimensional characters or even a real screenplay. Scenes ramble on and on and on and on, yet not with the sense that David O. Russell is trying to capture the rhythms of real life, but unfortunately with the reality that he just turned the cameras on and let the A-list actors flail around and riff without focus. It was akin to watching many of those awful so-called comedy films featuring our beloved cast members and comedians from "Saturday Night Live." You know exactly the ones I mean. In one awful movie after another, we are given performers that we love and we know are funny but the filmmakers in question, who don't bother to give these performers a script or story or any situations that we care ab tor play to their strengths, they repeatedly just let the cameras roll, with the hopes that our comedic heroes will just "be funny" and the filmmakers in question can call it a day.

That is precisely what "American Hustle" felt like to me. It felt as if David O. Russell thought that he could front-load his movie with A-list stars, combine them with the nostalgic allure of the 1970's, dress them up in funny wigs and the loudest, most garish clothing and leave it at that. But in doing so, the screenplay on display felt as if it was the very first draft and the cut on screen was the very first edit. It is a film that meanders, rambles and falls allover itself trying to find its identity. It had no sense of pacing and for a satire/caper movie, that is a travesty. A film like this, which is essentially a version of a heist movie, either needs to be comically or dramatically frenetic or conversely, one that elicits a slow burn of events, both qualities that would indeed build the tension as situations become increasingly and even desperately complicated and the characters' respective plans threaten to unravel at any moment. 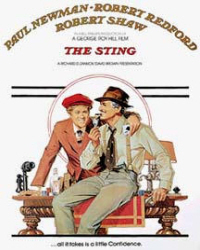 Think of films like Director George Roy Hill's "The Sting"(1973) or Director Steven Soderburgh's "Ocean's Eleven" (2001) or any number of films written and directed by The Coen Brothers, for instance and remember how the large cast of characters interconnected, how the plot was structured, tightened and escalated, and most importantly, how your reactions towards those characters and the plot intensified over each film's duration. Not so with "American Hustle." Not one bit.

The largest problem that I can assess about this movie is that it all felt to be just made up on the spot and in doing so, "American Hustle" contained no overall purpose, perspective or even a reason of being. Did it even matter that the events were kinda, sorta, maybe or maybe not based upon the ABSCAM operation since the film seemed to have absolutely no opinion or viewpoint about them? Did it even matter that the film even took place within the 1970's as it seemed to have no opinion over the decade other than, "Wow.. Didn't we all just look ridiculous."

The reasons that a film like "The Wolf On Wall Street" was so triumphantly successful was that Martin Scorsese ensured his film contained a real perspective and viewpoint over the subject matter and the time period in which it depicted. Perhaps an even better example would be Writer/Director Paul Thomas Anderson's brilliant, sprawling 1970's/1980's porn epic "Boogie Nights" (1997), in which he found a real perspective about the people and the time period that transcended the clothes, the discos and the soundtrack. "American Hustle," by contrast is completely superficial to the most innocuous degree. Having characters express ad nauseum that now they are going "to be real" (oh the irony..) is not nearly enough to hang a movie onto. It has no perspective over anything because it is a film that just doesn't care.

Look, David O. Russell is a filmmaking necessity as far as I am concerned. In our increasingly homogeneous age, he is a director who is doggedly idiosyncratic, a trademark that can lead to severe inconsistencies with quality control. In some ways, I can hardly believe that this is the same filmmaker who made the excellent, wonderful "Silver Linings Playbook" from just last year. But in other ways, I really can believe this is the same filmmaker as movies like "I Heart Huckabees" (2004) and "The Fighter" (2010) were either wildly erratic as well as vastly over-rated.

"American Hustle" presents the ultimate con of attempting to look, sound and feel like a film with a purposeful epic sprawl, thus ensuring it obtains a prestigious pedigree, box office dollars and award season attention. But since this is a film that has not even one point of view, which would be contained in a real screenplay, then the entire proceedings are meaningless. It is a movie that does not want to understand its subject matter, so why should I care? Russell leaves all of his actors stranded, ranting, raving and working themselves into a frenzy and for what, if there are no real characters for them to play? The terrific Jennifer Lawrence, unfortunately comes off the absolute worst this time around, struggling with a wandering accent and motivations that seemed to have been shouted at her from the cameras the moment she arrived on set. They all deserved so much better than this and so did we.

Like I said, if you liked or loved this movie, I will not change your mind and I certainly did not intend to hurt any feelings. If you had a great time with "American Hustle," that is great and I am happy for you. But, for me, I felt as if I saw right through it all so please do not expect me to sit idly by as this film garners more and more attention and awards over the next few months, basically showing us how David O. Russell has effectively fooled us all. I just know what I saw...and in "American Hustle," I saw a completely plastic film, as artificial as those terrible toupees, and in which there is no "there" there whatsoever.

Scott Powhatan Collins was born and raised in Chicago, IL and is a current resident of Madison, WI .He is a lifelong enthusiast of music, books and films. Hisbrain is filled with DJ dreams, filmmaking fantasies, literary luxuries and all manner of useless information. He chronicles his thoughts and reviews on his two blog sites Synesthesia (http://www savagejukebox.blogspot.co.uk) and Savage Cinema (http://wwwspcsavage.blogspot.co.uk), and is always on the lookout for the next piece of art to blow his mind and capture his heart.