Ferdy Fox’s World of Horror #2 – For Madmen Only 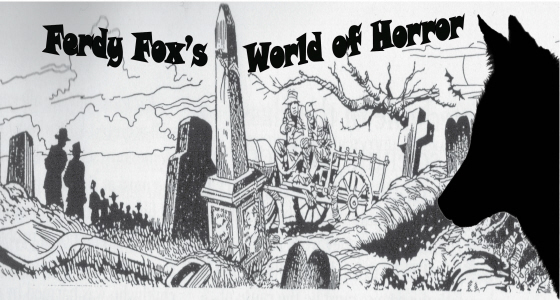 Christmas - a time for getting together with family and work colleagues – in other words, people you wouldn’t normally associate with. But take care, those rounds of Christmas parties are like dousing your knackers with Jack Daniels and setting fire to them – that warm fuzzy feeling soon gives way to excruciating pain.

So instead of going out and getting drunk with people you can’t stand – why not stay in and watch a couple of Horror Films? Here’s what’s out in the UK on DVD or VOD this festive season :-

Horror is all about context. On its own, a man in a pink rabbit suits is not especially scary. Now put yourself in the back seat of a car, you can’t see anything outside but streaking scarlet, and on either side of you are two bloody corpses. You look to the front, and see a man in a pink rabbit suit in the passenger seat, slowly turning his head. 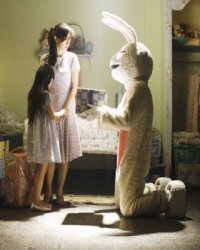 This Indonesian horror is an invitation to look at the world through the lens of a lunatic. Abimana Aryasatya is magnificent as Elang the unsmiling Djarkarta barman haunted by a relentless series of disturbing images. He takes in the beautiful prostitute Jingga (played by Imelda Therinne) who compellingly persuades Elang to execute bloody revenge for her.

“Lynchian” is a rather lazy and unimaginative way of describing a film that is darkly surreal – and yet David Lynch would be proud to have his name associated with some of the sequences in this film. That freaky pink rabbit appears at regular intervals throughout the film and has a number of revelatory twists in his tail before the film plays out. The film’s director Upi is celebrated in her native Indonesia, Shackled will hopefully bring her notoriety to the international stage.

The Conjuring
(released through Warners)

Hollywood has been producing a lot of haunted house movies of late -  including Sinister and Insidious  - and all of them have been to intelligent, quality horror what the Banana Splitz have been to serious rock music.

But Conjuring is a whole different kettle of fish. James Wan, who directed the afore mentioned silly Insidious, gets everything right this time.  He had a much bigger budget this time around, but it’s not simply that. The problem with many big budget Hollywood horror movies is that they go for the Sensory Overload in the final act – throwing everything at the screen in an attempt to give you the BIG experience – and in doing so the credibility and integrity of the initial set up are tossed aside. Jeepers Creepers is a perfect example of this. Conjuring is a whole lot more absorbing because it is rooted in believability and forced to base the film on real life events, and the real life ghost hunting couple Ed and Lorraine Warren, who may or may not be charlatans (I am not a betting fox, but if I was, my money would be on the former!).

The events in The Conjuring may not be how it actually happened, but the important thing is – it feels real. This why the Conjuring was such a smash in the cinemas, thrashing all the other OTT Horror competitors.  The scares work much better on the big screen, but the domestic DVD will still give you goose bumps in the most uncomfortable places. If you’re a budding filmmaker you are well advised to play the scary sequences in slo-mo – because the editing, framing and pacing are a master class on how to make your horror creepy.

The final scene feels like a set up for a sequel – or even a TV series. They could do worse – but please James & Co - stay away from that sensory overload button.

This awful recession has bit many of us. A scavenger fox like me has noticed a definite decline in the quality of food to be found in people’s bins.  Others to have felt the pinch include the beleaguered independent filmmaker - which is partly why we have ended up with so many cheap found footage movies. 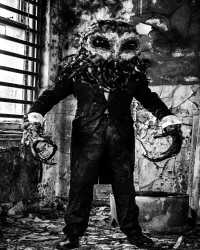 So praise must go out to the enterprise of Hex Media. Earlier this year they were raising the completion money for Lord of Tears on a kick-starter website - and now the film is finished and ready for public consumption.

Very wisely Hex Media are bypassing those fuckers at Amazon who think they can get away with only offering a measly percentage for every DVD or VOD sold, and so Lord of Tears is available for buying or viewing only on their own website. And what a well designed and impressive website it is. With a creature with an owl head and graphics that draw on ancient mythology, I defy any horror fan to visit it and not want to see Lord Of Tears
http://www.hexmedia.tv/


It is a great relief then that the film lives up to the billing. The first twenty minutes are relentlessly arresting, never letting you forget you are watching a horror film. I hate the vulgar talk of film budgets, but Lord of Tears does not reveal any hint of being a low budget film - the colour grade is top class and the cinematography is spectacular. Some of the crash cutting and off key children’s music box sounds are a little Psychoville for me – as in what the League of Gentlemen boys did for parody and laughs are done here seriously. But that’s just me – overall this is top draw stuff giving us stirring hope that with this business model we might actually see a revival of the financially viable British Horror Film. (I am of course thinking of the golden days of Hammer.)

The collectors DVD is priced at £18 or you can watch it on VOD at a bargain £4.49 – so at a fraction of the cost of a round of drinks for those already pissed up work colleagues.

A Warning To The Curious
(released through the BFI)

This is not a new DVD release, but I am including this because Christmas wouldn’t be Christmas without a M.R. James ghost story. M.R. James is quite literally the Don of the British Ghost Story (he was actually a Cambridge University academic) and The BBC used to regularly to produce a story of his to be broadcast during the festive season. The Beeb have since abandoned that to pursue other interests, but thankfully those marvellous productions are available on DVD.

My favourite is A Warning to the Curious – because it has the strongest elements of complex mystery and Norfolk mythology. It Stars Peter Vaughan, who will be familiar to UK TV audiences as Grouty in Porridge, playing a recently dismissed city worker travelling to the remote Norfolk countryside in search of archaeological bounty – a buried sacred crown. All those warnings go unheeded and his digging is interrupted by the dark forces charged with protecting the crown.

So this month’s Fox’s Gonad award is winging its way to Indonesia for the darkly disturbing Belenggu aka Shackled.  Selamat (which is Indonesian for Congratulations apparently).

My next column will be Ferdy’s New Years Honour list – where I name my top 5 films of the last 5 years from the International Horror scene. Be warned - it’s For Madmen Only.