Ferdy Fox here, connoisseur of the frighteningly fantastic and the morbidly macabre.  Welcome to my World of Horror where I review the latest UK DVD and Video-On-Demand releases.

But don’t worry British public - help is at hand ! When I am not propping up the bar at my local public house and ripping the piss out of the locals, I like nothing better than to watch the latest Horror releases. Yes – ladies and gents I do all the pulling and tugging so you don’t have to. My column will be an overview of the films I feel should pulled out of the pile and are worthy of your attention.

So what are Ferdy’s Favourites for the Halloween season? 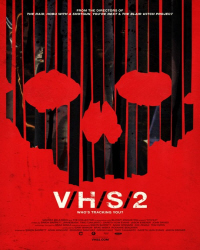 Rather like the epic Breakdance 2 – Electric Boogaloo you don’t need to have seen the first V/H/S film to appreciate and understand V/H/S/2. That’s because the V/H/S series is a portmanteau collection of stand alone found footage horror films – so it’s a Doctor Terror’s House of Shaky Cameras if you will.

This time around the scares are bigger, bolder and gorier with plenty of powerful WTF and did-I-just-see -that moments?  One of the strongest segments is Ride In The Park from the daddy of the found footage movie - Eduardo Sanchez of Blair Witch Project fame. Ride In The Park is a simple story – a bloke on a bike rides through the woods with a camera fixed to his helmet and gets attached by a zombie. He turns into a zombie himself and with a bunch of other zombies launches a blood thirsty attack on a children’s party.

As the parents desperately shepherd their kids away from the undead onslaught, there’s an excellent zombie’s eye view of being run over, where you get to see underside of the car passing over you.

But it’s third story in V/H/S/2 that has got the keyboards clicking and the tongues wagging.
Safe Haven takes us into the inner sanctum of a religious cult, where an intrepid film crew interview the controversial and rather dodgy cult leader. Things go all Jim Jones/Heavens Gate which provides us with the most powerful image of the film – the simultaneous mass suicide shooting - and from then on everything goes really mental.

Just a few years back they released a Director’s cut of the Wicker Man and this latest DVD release from StudioCanal now claims to be the Final Cut. Does the world really need yet another re-release of this film?

The answer is a re-sounding YES! If nothing else, it gives us a chance to further bury the memory of the abomination of the Nicholas Cage remake. But beyond that - the Wicker Man is a shining example of British Cinema at its finest – a film that demands to be watched, discussed and celebrated.

The Wicker Man is a horror film with a difference – so much so, it may not even be a horror film at all. It is a brave film that dispenses with the old horror film clichés about evil, and invites the viewer into thinking about the old religion, whose symbolism and imagery lies deep within our collective sub-conscious.

There is some much to like in this film, all growing from Anthony Schaffer’s script – ostensibly a mystery about a missing girl from a remote Scottish island pagan community – investigated by a dour straight-laced policeman from the mainland.  Anthony Woodward is magnificent as the Christian cop Howie who gets increasingly shocked and dismayed by the heathens around him. He’s stuffy, sanctimonious and a right miserable so and so, yet somehow still likeable – a man whose faith, misguided or not, remains unshakable to the end.

Horror legend Christopher Lee is a masterful presence as Lord SummerIsle. Lee, a man who has built a career on portraying evil, he has proved himself to be a force for pure good when he tried his best to save this film from oblivion, writing personally to all the main UK film critics and even paying for their cinema tickets. His efforts did not immediately save the film, not properly backed by the original distributor it performed poorly at the box office, but it paid off in the long run. Certainly Lee’s appearance in The Wicker Man gave the film sufficient profile to get it screened on late night television, which is how the film found its cult status.

You can’t talk about the Wicker Man without mentioning Paul Giovanni’s folk music score, which plays a key role in conveying the ideas and lifestyle of these remote islanders.This latest DVD four disk release contains a CD of Giovanni’s magickal score – and for the completist – there are three full versions of The Wicker Man including the afore-mentioned longer Director’s cut. Although it perhaps runs smoother without the prologue of Howie on the mainland, and keeping the whole film on the island as with the Final Cut, which opens with the aerial shot of the plane flying to the island.

For all the various versions, all roads lead us to the same place - the burning of the Wicker Man. A finale that is spectacular, breathtaking, even touching. Though this magnificent film stands up to repeat viewing, I envy the people who will be seeing the Wicker Man for the very first time.

By the way, if you want detailed information on all the different versions of the Wicker Man I must direct you to this excellent and extensive website.
http://www.steve-p.org/wm/ 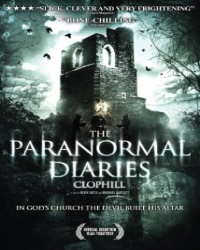 This film’s opening line, a mumbled “testing the night vision camera” lets you know from the off that we are in for another Blair Witch/Paranormal Activity fake reality affair. But stick it with it folks, because while this film will win no prizes for concept originality, the film really comes into its own when it takes you to the ruined Church of St Mary, Clophill, Bedforshire.

Paranormal Diaries – Clophill is not a found footage movie. It’s a faux documentary about a team of film-makers investigating the real life site of many strange goings on what has, since the 1960s, been the site of grave desecrations and satanic rituals. It is the work of generations of pesky feral kids, or something altogether more sinister? Evidence would point to the latter. All the facts and ghost sightings leading up to the over-night stay at Clophill are real, though some of the interviewees may be actors. So with every interview you do find yourself playing a game of ‘spot the actor.’

There is a fair amount of green tinged NightVision camera stuff - and some of it comes across as bit like an episode of Most Haunted minus Derek Acorah and Sam his psychic servant (surely the world’s greatest comedy psychic double act). However the film creates a vivid atmosphere –  you can literally feel the drizzle and the graveyard’s cold breeze on your cheek - and there are some powerfully scary moments before the credits rolls.

Anybody with a fascination with the myths and legends that are weaved deep into the fabric of our land will take an interest in this film. It creates a marvellous arena, and the fictionalised ending does not tinker disrespectfully with the actual folklore of Clophill.

Through my pain-staking research I have discovered that Clophill Church is on the same longitude as the Borley Rectory – reputedly the most haunted house in England. Co-incidence? Maybe that’s the site for the next visit for these paranormal investigators.

Dead of Night
(released by the BFI)

No it’s not Michael Redgrave and his nasty ventriloquist dummy from the Ealing Studios post-war classic. This BFI release contains the only three surviving episodes from the supernatural BBC TV series of the same name from the early seventies.

Of the three stand alone episodes, the strongest is The Exorcism which sees two middle-aged, middle-class couples gather for a Christmas dinner party at a rennovated country cottage.  Made in 1972 – this is coming at you from a time when a man could wear a safari jacket without being greeted with hoots of derison.

The four people are jolted out of their smug safari-suited complacency when the male host complains that the red wine is actually blood. Then the other three guests taste something foul – and it’s not the chicken! A powerful shocker is provided when the hostess sees a child’s skeleton in the darkened room upstairs – which is enough to put the dampers on any dinner party.

The Exorcism is a ghost story with a polictical spin, and the suffering of the cottage’s dispossed previous tenant is graphically and powerfully communicated. Though the TV broadcast at the very end is perhaps laboured and an unnecessary under-lining of a polictical comment already effectively made.

The other two episodes are also worthy of your attention. Return Flight – about  an airplane pilot (Peter Barkworth) who bitterly regrets being too young to be “one of the few” - a fighter pilot in World War 2. He sees himself as “just a glorified bus driver” and starts seeing and hearing things in the sky.

In A Woman Sobbing, Anna Massey (of Peeping Tom fame) is the vulpine faced woman who hears just that in the room upstairs. But maddeningly for her - nobody else does.

This BFI DVD comes with a booklet containing info on the TV series and the people behind it. The booklet contains a most pertinent quote from 1990 by Don Taylor writer and director of The Exorcism :-

“Television does not have to be cheap, depressing and second-rate. It is beautiful, beautiful medium, capable of anything and everything the human imagination can conceive. It can be whatever we want it to be. Why are we throwing it away?”

He is so right - and this DVD is another pointer to an era when creative story-telling reigned over our television sets. Somewhere somehow we lost our way and gave in to endless parades of talentless people on talent shows. But you know what? The war is far from lost. The golden age will return

So this month’s Fox’s Gonads awards goes to the Wicker Man. Well deserved boys – your Gonads award is in the post!

I’ll be back with more Ferdy Fox’s World Of Horror reviews for the Christmas season.
To join my mailing list, to send party invitations and chocolate cake email me at This email address is being protected from spambots. You need JavaScript enabled to view it.