Like many of my generation, the BBC situation comedy Dad’s Army was prime time viewing during the mid-seventies.  A show about the British Home Guard, a collection of volunteers doing their best  at a British coastal town to prevent a Nazi invasion during wartime Britain. The volunteers were usually too old to join the army, hence the common nickname Dad’s Army.


However, younger men due to health reasons or teenagers not old enough to subscribe to the British Army, joined the Home Guard. Created by Jimmy Perry and David Croft, who also gave the British viewing public, It Ain't Half Hot Mum, Hi-de-Hi! and You Rang, M'Lord?  Writing from their own experiences they gave a wonderful collection of characters, the pompous and authoritative Captain George Mainwaring (Arthur Lowe), the camp and polite Sergeant Arthur Wilson (John Le Mesurier), the loyal but wayward and loud butcher Lance-Corporal Jack Jones (Clive Dunn), the eerie and cynical local undertaker Private James Frazer (John Laurie), the  mummy’s boy  and gullible Private Frank Pike (Ian Lavender), the fragile but sweet Private Charles Godfrey (Arnold Ridley) and of course the cockney spiv  Private Joe Walker (James Beck). With such a collection of different personalities brought together by war (if it hadn’t been for the outbreak of war it would be extremely doubtful if this group would have been formed) the foundation for one the most loved British comedies was laid. 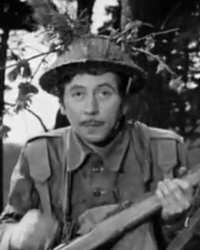 How the nation laughed mid-week at the adventures of Mainwaring (Arthur Lowe) and his collection of misfits trying to do their bit for Britain.  Like all great situation comedies, it is character driven in any circumstances that they encounter, which purely enriches the hilarity. Dad’s Army would end with individual shots of the characters training in the woods  to the theme tune.  As the show came to a close we, the viewers, got one last glimpse before next week’s show or the next series, of those wonderful characters reinforcing their traits.  Mainwaring would march with pride, Wilson looked like he was going for a stroll in the park, Jones looked on edge, Frazer was ready for the kill, Pike seemed disinterested and full of teenage angst, Godfrey  was strolling like it was a ramble through the woods and Walker was puffing on a cigarette looking over his shoulder, hoping not to get caught.  When I saw this for first time as a child I was overwhelmed, and at a young age I had no comprehension of being a rebel or what style was,  maybe some of my peers did. However at this early part of my life I didn’t, yet all I knew was that Private Walker was someone I wanted to aspire to.

From then on  I was totally mesmerized by his walk, his accent (my God, how I wanted a  London accent and later on in life my wish has come true).  The shenanigans, his clothes and the way he lived life by his rules, and no matter what situation he was in, he remained upbeat, cheeky  and always looking for a way to earn a quick pound, be it selling ties, clothes pegs, cigarettes , booze or whatever.  All items that fell off the back of a lorry, no questions asked , cash only and no return of goods. To me, as a boy under the rule of parents and school, his rebellious streak was something I wanted to be, and when I was able to make choices for myself, subconsciously I suppose my love for Private Walker has sometimes (not all the time) governed my choices.  Of course Walker was based on the spivs, sharply dressed men who dealt on the black market, with their own agenda and they resisted authority.  So that is why the concept of Mod, and later on Acid House, felt so right for me. It was about the clothes, being a lad, the gift of the gab, ducking and diving and belonging to a group that was outside mainstream society. The only thing we had, that the wartime spivs didn’t, was a musical identity.  However with the birth of rock ‘n’ roll spivs morphed into Teddy Boys.

When James Beck died suddenly at the age of 44 in August 1973 suffering from pancreatic cancer, I felt a tremendous sense of loss.  I watched the remaining three series but found it hard to laugh without Private Walker. Even today, I can only watch episodes with the appearance of Beck. Furthermore, Beck’s career was on the up and had he lived he was bound to have been involved in more great British comedies.  He would have been perfect for Porridge (made a year after his death), perhaps even Arthur Daley from Minder (although George Cole’s performance is legendary). It may even have entered John Sullivan’s head when he was thinking about who was to play Del ‘Boy’ Trotter in Fools ‘n’ Horses, as Daley and Trotter certainly could pass off as the bastard sons of Private Walker. Croft and Perry could have made a spin off series about Walker after the war, nothing against the rest of the cast nor characters, but he would have been the strongest to have his own show.  Alas this is all speculation and we will never know, however all I can say is thank you James Beck and Private Walker for giving this young  boy from Surrey guidance, for better or worse, but it’s been fun !