Gore Verbinski and Jerry Bruckheimer's Lone Ranger is a lot better movie than the media line and box office receipts so far might suggest.  The filmmakers succeed here, and bring home the silver if not the gold, by proving their  respects to  the entire Western film tradition through strong story-telling, solid performance, glorious visuals and technical excellence.  It's a different kind of classic with a lot for eyes willing see what it offers and heads ready to have fun.

Verbinski and Bruckheimer took on a task that many others had tried but given up on.   Though the Disney brass might now want to bury them alive with scorpions in the desert, time and syndication will likely prove the film-makers recognized a legend of rare worth and untapped potential.  Created by George Trendle and Fran Striker, the Lone Ranger radio series, pulp and comic books, and syndicated television program were hugely popular.  His trademarks, like "Who was that masked man?", "Hi Yo Silver" and 1812 Overture theme song are etched in our cultural DNA.  Yet, the Ranger had barely ever made it to the big screen and had been all but abandoned to the salvage bin.  This revivalist team may have been left for dead in the headlines, just like their title character, but they have made more of this iconic property than the theme park ride or treacle-fest that could have easily resulted. 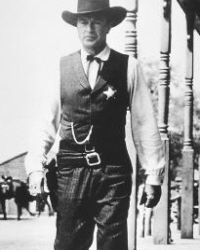 Though too consciously a pastiche to stand squarely alongside original Western classics like Fort Apache, Red River, or High Noon,  The Lone Ranger is a first-rate Western movie that makes good use of  familiar elements, traditional and revisionist too, even as it makes fun of the lot. Ranger also borrows from send-ups and anti-Westerns, from Little Big Man to Once Upon A Time in the West.  We get train robberies and venal railroad conglomerates, outlaws with white hats as well as black, bad sheriffs, brave and savvy pioneer and dance-hall women, idle town folk and corrupt colonial governance, lost Indian mines and cutthroat mineral cartels, animals in drudgery and free, including spirit birds and a horse that is a little too clever ... and most importantly American Indians.

Though the railroads quickly spelled an end to Plains Indian life after the Civil War, the Comanche still ruled the West Texas badlands in 1869, terrorizing other native tribes as well as encroaching whites.  As documented in S. C. Gwynne's Empire of the Summer Moon, they ran wholesale operations of stolen cattle. Their own imperialism slowed them down enough for the fledgling Rangers of Texas to finally put them on the run. Whereas Jay Silverheels portrayed Tonto as an intelligent but assimilated sidekick, Depp's version is renegade, not dumb but crazy, so totally beyond the whites' world that he feels bound to keep a parched-dead crow on his head.  His Tonto ties the movie together as narrator and signifier.  He manages to keep his character real, even if tongue-in cheek, without falling into the bald parody that bedevils his Jack Sparrow role in the Pirates of the Caribbean movies this crew also helms.

We meet Tonto as a mummified prop in a sideshow diorama of Comanche life. He comes alive to a little kid and explains the crow on his head.  As the rest of the tale begins in earnest, it moves fast with surprising fidelity to the established radio/television origin stories.  Armie Hammer's John Reid shows up as naive  as Jimmie Stewart's Destry Rides Again character only appeared to be, and quickly ends up fighting desperado Butch Cavendish, played by William Fichtner. Some of these chases are ridiculous, even in fun.  Still, it could be worse, like, for instance Iron Man 3 (or even Pirates 3). But the team knows how to dial the overkill back quick and get on with the story telling. We meet the rest of the crew, including brother Dan Reid who deputizes John just in time to be led into deadly ambush, with John left barely alive for the vultures.  Except for the inexplicable substituting of John Reid's name for Dan's, this is all orthodox Ranger gospel.

What comes next, Butch's carving Dan's heart out and eating it raw, is revisionism right out of Serge Leone but as nicely done as that kind of deal can be.  Tonto's resuscitation of John, with spirit-bird assistance, careens dangerously between put-on and mystic.  John re-appears as a pretty fair likeness of the classic Lone Ranger except this he still has no idea what he is doing. Gorgeous use of venerable Monument  Valley scenery enhances the mythic atmosphere, making the befriending of wild white horse Silver akin to Perseus taming Pegasus.   Their first forays into battle contrast our  noble but inept heroes with no-good ruthless adversaries, alongside a civilized world too eager to accept depredation.  Their chances don't look promising and their learning curve comically slow.  Keeping the heroes hapless keeps us rooting for them instead of for the bad guys who do a hell of a job being bad.

Ranger does balances mysticism with grit and keeps our attention mid-film by developing characters only peripheral to the canonical mythos. Ruth Wilson as Dan's widow Rebecca adds a formidable ally, as does Helen Bonham Carter as dance-hall impresario Red.  Both add considerable substance, enabling Verbinski and company to dial back the effects and let the characters propel the story.  Tom Wilkinson's evil railroad tycoon Steve Corona, pillar of Western society as well as Butch's boss, proceeds from mere loathsomeness to diabolical ambition. Corona exudes mythic evil on a scale the Ranger and Tonto seem most unlikely to conquer.

To the film's credit, the main good guys have to reach into themselves and see their limits. John is beaten badly and made to realize how desperate the whole train robbing and gunslinger situation really is . We learn the sad story of Tonto's madness, exile and crow hat in a visit to a 'Comanche' tipi where the Indians speak better English than their visitors.  Eerie flashbacks reveal that Tonto's troubles and destiny are intertwined with a betrayed secret mine.  Butch and Corona were the culprits, now proceeding to make out like silver tycoons from their discovery. Their grand plan involves railroad exploitation and ruin, cartel monopoly and corruption, and careless destruction of anything in their way. Along the way, they kidnap Rebecca and child, bribing the youth while opiating the mother. The masked Ranger is made to seem the outlaw, in the classic mode we've known since Alexander Dumas.

Western movie tradition calls for a long chase finale.  Usually the chase is too long, as few directors after John Ford have realized.  So in grand pulp style, Ranger and Tonto have to head to the rescue fast but find things are not so easy. Verbinski is obviously missed Ford's examples of how to wind up a story. Though not as excessive as the Pirates’ finale scenes, this goes on and on. As well done as it is, the audience could lose half the last hour and not miss much.  Excess shred dramatic credibility. Verbinki has banked on excess making putty of his audience, but too much is too much even if so many traditional Westerns also devolved into wayward shaggy beasts in their climaxes.  False climaxes and last ditch hurrahs get old after enough too many fights on top of trains and impossible horse tricks.  All this is beautifully done in Ranger, but is still too much. 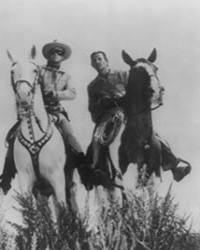 Yeah, the Ranger saves the day, realizes his mission has just begun and  rides off with Tonto, who is still not convinced 'Keemosabe' isn't really the crazy one.  The full legend told, Tonto reverts to revived mummy and then to backdrop, leaving only a sideshow visiting kid to tell the tale again.  Re-telling the origin is a one-time deal with a mystery hero like the Ranger.  In the original radio, pulp and television appearances, the origin story was about the only time we learned anything about the character behind the mask.  The Ranger we know was a cipher.  That may be why he was once so popular.

I don't know if there is room for a sequel   The expanded Ranger mythos was great this time but could it hold its own in further tales? I doubt these characters are sustainable.  Disney may want to write off this franchise.  As it is they have produced a remarkable movie that pays faithful tribute to its sources, advances the visual tradition of Western film and tells a good story with characters that come to life. If they leave this movie as a stand-alone, it's a lost gem that could be be highly regarded over time.  If they go for a sequel, all they've got is another franchise to sell tacos. Tribute told, it might be wise to let the Lone Ranger get lost in the Western sunset again.

Postscript: The names of creators George Trendle and Fran Striker do not appear in the credits.  This may reflect disputed ownership of the property but neglecting to credit the original creators might have put a box-office hex on this otherwise worthy film.