In 1993 a man called Cliff Twemlow passed away. When he died at the age of 55 a whole mini-film industry died with him. But Cliff didn’t only just make films, he wrote the plots, scored the music for them and starred in them too. Oh, and he wrote paperback pulp novels as well. And before he made his own movies he wrote a couple of thousand tunes that were recorded and put out by DeWolfe Music. And he was a night club bouncer.

This remarkable character entered the earth’s atmosphere in 1937 and for all of his life lived and worked in and around Greater Manchester. The odds are that you’ve probably never heard of him and that’s because by nature of the way he did things his legacy has slipped into obscurity. Only recently with the publication of ‘The Lost World of Cliff Twemlow – King of Manchester Exploitation Movies’ have people begun to take an interest in the self styled ‘Tuxedo Warrior’.

It was in the late sixties while working as an extra at Granada TV to supplement his doorman’s wages that Cliff realized how easy it was to write music. Well, not ‘write’ it exactly. He hummed tunes into a tape recorder, had them transcribed and bingo! another sale to De Wolfe. Over the years his tunes have been used TV ads and film soundtracks including George Romero’s Dawn of the Dead. In the 1970s he switched his talents to writing and had two novels published before his autobiography Tuxedo Warrior came out as he was recuperating from a vicious beating. In 1982 it was optioned by a Hollywood film company and Cliff found himself in Africa as one of the cast. Using his earnings from that he came back to Manchester determined to make movies his way.

The first outing for Cliff and the crew who eventually evolved around him was a trashy Mancunian gangster flick called GBH (1982). It was a straight to video offering that was picked up in those pre-certificate days by Video 2000. It became one of home videos first big hits, mainly through its non-stop action, cheesy dialogue and general air of gung ho DIY. Cliff was on a roll and recognizing the potential of home video set about creating a one-man film industry from his home base in Eccles. The problem was, Cliff was hopeless at finances and often oversold the percentages to his product’s backers. That’s why they are so hard to track down these days, quite simply, they are mired in a tangled web of unresolved ownership issues. 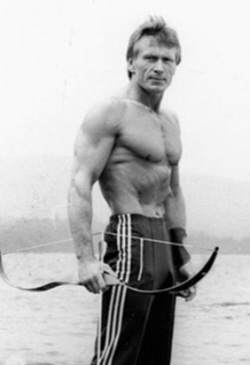 But Cliff’s catalogue of exploitation movies was formidable – from the James Bond rip off Target Eve Island (1983), possibly the only James Bond rip-off to be filmed in Grenada at the time of the American invasion! – to the  lychanthropic Moonstalker – The Quietus (1986) filmed in a Boy Scout camp near Salford, Cliff’s enthusiasm for film making drew in a formidable roster of Mancunian martial artists and body builders. Stuntmen doubled as sound engineers, the lead actors performed lit by car headlights when lighting rigs didn’t turn up. Shooting was carried out guerilla style in locations as varied as people’s homes, pubs, clubs, anywhwere they could blag. Jodrell Bank telescope became HQ of the International Space Federation for Firestar – First Contact (1989). A garage in Droylesden was transformed into a film studio and special effects centre for Eye of Satan (1987).

When not actually making movies Cliff and his crew, which included internationally renowned Wu Shu master Steve Powell, Ray Nicholas, now top UK stuntman, and John St Ryan, currently domiciled in Hollywood, they would make demo-movies, ten minute shorts which they used to drum up interest and financial backing in the nightclubs of Manchester. Sometimes they got made, very often they didn’t but Cliff kept on trying.

Sensing the coming changes to media outlets that were beginning to appear via home computers, cable and satellite, he threw himself and the crew into making sixty minute long movies for satellite consumption. They were to be pared down to the bone action thrillers shot over a weekend. Three were written but sadly only one (Bad Weekend 1992) was completed. In 1993 Cliff died and for quite a long time it seemed that his story had died with him. The master tapes for the films disappeared, so did a few of the people involved in them. On the internet there was only the vaguest of hints that Cliff had existed at all, mainly through mentions on Steve Powell’s homepage. Then in the mid 2000s enough material had been gathered through interviews with Cliff’s pals and collaborators to write a book (co-authored by me with Andy Willis: see below for details). The Salford Film Festival showcased two of Cliff’s films and since 2009 a slow, but steady stream of videos have been downloaded onto youtube. Some of Cliff’s music, written under a variety of pseudonyms, has been included on DeWolfe CDs and the name of Cliff finally began to become recognized as a true auteur of the exploitation genre, cited and praised by a new rising generation of young film makers.

Cliff Twemlow: The King of Manchester Exploitation Movies on FaceBook