Best of British - Some People – An Amazing Snapshot of Sixties England

Some People, made in 1962 and released in April 1963 directed by Clive Donner (What's New Pussycat, Here We Go Round the Mulberry Bush, The Caretaker) is an early British film on Rock ‘n’ Roll.  Originally made as a film to get young adults to participate in the Duke of Edinburgh Award, as all profits went to the scheme, it is far from a propaganda film as it can act as a visual case study of the early days of British pop culture.


Made before The Beatles put their stamp on Britain and the world, the film Some People senses that the youth of Britain are being creative and pioneering.  Set, and filmed entirely in Bristol, the film’s opening is spectacular, a montage of all mod cons against the sound backdrop of some upbeat jazz, music , washing machines, televisions, jewellery being displayed in the town’s shop windows, and hire purchase readily available.  Meaning the working class of Britain, after the Second World War, could afford these luxury goods by paying for them in instalments, emphasising British Prime Minster Harold Macmillan’s optimistic quote from 1957 “most of our people have never had it so good”.  As the viewer believes everything it hunky-dory, the camera falls on a disillusioned youth Johnnie (Ray Brooks, The Knack …And How To Get It, Big Deal, Eastenders) smoking intensely and dressed in the latest Italian suit. 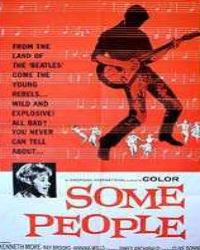 Johnnie is a young man who works in the timber yard with his friend Bill (David Andrews, who went on to direct Hollyoaks, Grange Hill) and after work they meet up with Bert (David Hemmings, Blow Up, Unman, Wittering and Zigo, Barbarella),  who like to chat up the girls and drive around on their motorbikes. Moreover, it is down to speeding on their bikes which leads to a minor accident, and as a result Johnnie, Bill and Bert are banned for 12 months. At a loose end, they occupy their free time roaming the streets of Bristol at night, not really causing trouble or being anti-social just being high spirited, yet everywhere they go they are unwanted. Bert takes his friends to his old youth club, and it transpires that Johnnie is a natural musician, as they unlock the club’s piano and Johnnie starts to tinkle the ivories.  The kids put down their table tennis bats and begin to jump and jive to American influenced Rock and Roll. The youth club leader orders them out, and accuses them of being Teddy Boys, which they resent, even though they have the haircuts, wear the clothes (early sixties Teds moved from their classic Drapes look to classic suits, which progressed further by the Mods) and ride motorbikes. This scene is symbolic of how liberating music is, and yet how it is resented by those in authority.

Undeterred the three lads wander into the local church, and Johnnie picks up the keyboards again, this time on the grand church organ, which in turns leads to the vicar chucking them out. Yet the lads are aided by  Mr Smith, (Kenneth More, Reach For The Sky, The Longest Day, Genevieve) a volunteer at the church,  who runs the choir and the Duke of Edinburgh scheme, who has a teenager daughter himself Anne (Anneke Wills, The Pleasure Girls, Dr Who, Strange Report). Mr. Smith shows an understanding for the lads, and allows them to rehearse in the church, as Bill and Bert can play the bass and guitar respectively. So it seems the perfect foundation for a new band, and with their Shadows style influenced music (Please remember before The Beatles and The Rolling Stones made it big, the kids of Britain adored The Shadows). However Bill feels it is a smoke screen for the lads to join the Duke of Edinburgh scheme and leaves the band, with a feeling of resentment. He is quickly replaced  by local black youth Jimmy  (Frankie Dymon) on drums,  Tim (Timothy Nightingale) on bass and their close friend Terry (Angela Douglas, Carrying on Screaming,  Carry On... Up the Khyber, Oil Strike North) on vocals.  Douglas certainly lights up the screen with her radiant smile and zest for life.  Furthermore Johnnie and Anne develop a relationship, much to the annoyance and jealousy of Terry. (Kenneth More ended up marrying Angela Douglas after meeting her on the set of Some People, and was 26 years her senior).  Now the film has turned from a sense of wandering, to a feeling of belonging, but this brings more problems as you deal with human insecurity and emotions. But once all the disputes have been settled, the film ends with another disillusioned youth smoking intensely at a Bristol bus station, so the saga continues….

Some People is a fast paced film with rapid dialogue and colourful cinematography, that captures the beauty of the story as it is a story with many layers.  It is not a moral nor an anti-youth film, in fact it acts as a motivator to young people to be focused and believe in themselves and to the older generation the values and culture of youth. All the cast went on to forge successful careers, (Kenneth More was already an established actor) especially David Hemmings, and even Harry H. Corbett (Steptoe and Son) has a cameo as Johnnie’s father, even though in real life he was 14 years younger than Brookes.  If you have an interest in the sixties and the birth of rock and roll in Britain, then this is the film for you.