Welcome to the Punch


Writer/director Eran Creevy takes a huge leap - from the grungy, micro-budgeted Shifty - to this slick, attractive action flick. Detective Max Lewinsky (James McAvoy) remains hot on the heels of the elusive Jacob Sternwood (Mark Strong) and is given a second chance to take down the master criminal when he is forced to return to London.

There's a strong Brit cast: Andrea Riseborough, Daniel Mays, David Morrissey, Peter Mullan and Johnny Harris all lend excellent support. The ubiquitous Mark Strong once again proves he can do no wrong. Sadly, the weak link is lead James McAvoy. His dubious, irksome cockney accent doesn't help. Why on earth couldn't he have just been Scottish? (NB: There are a lot of Scottish coppers in the Met and the accent lends itself well to being a) authoritative and b) tough.) And I hate to be short-ist but his diminutive frame (of  5' 7", to be exact) does not make him much of a physical presence amid the requisite macho posturing. He's also offered scant decent lines. 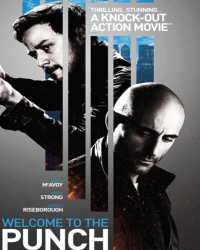 Which brings me to the script. Creevy has a knack for dialogue and it's displayed brilliantly, as in Shifty, when dealing with the minutiae of a situation. Unfortunately, the director seems to have got too bogged down in plot. The only sparky moments (and there are a few of them) occur when he's not forced to push the action forward. Subsequently, the whole thing descends into cliché. Instead of aping Hollywood action mores I wish Creevy had embraced the Britishness a little more. British cinema often fails when it is consciously aiming for appeal across borders. The success of say, Sexy Beast and The Long Good Friday can be put down to their intrinsic Britishness. Due to budgetary constraints British action cinema is relatively rare. What such films lack in spectacle can be compensated for by characterisation and dialogue. And this would have benefited by more focus on both. McAvoy's character is painfully two-dimensional and for an obvious lover of action cinema Creevy needs to give the words a lot more well, punch.

This is not, by any means, a bad film. As stated above, there are elements to savour. There are a few good laughs too. There's also an inspired set-piece which takes place in a twee grandmother's living room. (One of the rare occasions that Creevy embraces the film's parochial nature.)

The director does achieve some great-looking visuals. London has rarely looked as sexy and he makes the city itself feel like an international player. Working with a pretty modest budget for the genre - £5.5 million - Creevy's achieved impressive production value and you can't help but admire his ambition. So I wish the film well and he's certainly a director to keep an eye on.