The Disappearance of Alice Creed


Made in 2009, The Disappearance of Alice Creed is a tense psychosocial thriller centring on the abduction of a young heiress and her two kidnappers in a run-down flat in a high rise block somewhere in London. Written and Directed by J Blakeson, starring three talented British actors, Martin Compston,(True North, Red Road, Tickets) Eddie Marsan (Happy Go Lucky, Gangs of New York, Sherlock Holmes) and Gemma Arterton (Tamara Drew, Clash of the Titans, RocknRolla).

Danny (Compston) and Vic (Marsan) snatch Alice Creed (Arterton) from the streets of London and take her to their hideaway, a flat that has been turned into a prison cell, with basic facilities for the three of them to survive this ordeal. The kidnappers motive is simple, a ransom for the daughter of a wealthy business man. Yet it is not as simple as it sounds because Alice's father has already cut her off from her inheritance. Undeterred, Danny and Vic carry on with their devious plan, as the want for money in this case is the root of all evil. 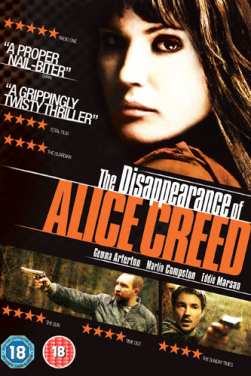 A simple enough plot, yet there are twists and strong character developments. The film evolves into a powerhouse of a movie. It begins with Danny and Vic transforming a council flat, in sombre silence, into a modern day dungeon, like a sinister version of Home Improvements. You know The Disappearance of Alice Creed is going to be an edgy film which takes you into a living nightmare. Purely relying on their acting skills, (as there are no other actors in the film), without the aid of special effects or big outside cinematic locations, Compston, Marsan and Arterton perform with pace, and as an athlete will use their energy to win the race. In the first thirty minutes of the film, as for the captured Alice, we are kept in the dark with very little dialogue exchanged other than the necessary exchange of words, but as Creed will not take this sitting down, even though she is gagged and bound to a bed, with a bucket as a toilet, a confrontational and survival situation starts to emerge.

The film not only focuses on greed, but manipulation, sexual tension and human interaction. The Disappearance of Alice Creed can be seen as a complex study of a love triangle, as the three character's histories overlap and, in turn, all of them feel like the jilted lover, coupled with a good old fashioned crime capper. The Disappearance of Alice Creed is certainly a poignant film, that leaves a lingering thought when the final credits start to roll. It works well as a film, and with most of the action set in one location, perhaps J.Blakeson may turn this into a stage play, because it has the ingredients to be a success in the theatre as it does on film.