Acorn Media UK has released six episodes of the hugely successful BBC's TV show Dixon of Dock Green. Prior to becoming a TV series, PC George Dixon (Jack Warner) was a character in an Ealing Film, The Blue Lamp (1950), where Dixon was shot and killed by the distressed and naïve criminal Tom Riley (Dirk Bogarde). Dixon was a kind hearted and conscientious copper, patrolling the streets of Paddington London, and just about to retire from the police force, before his murder. A subplot used by Hollywood many times. It was paramount that the British public had warmed to Dixon and his demonstrative ways. Yet he was shrewd and did not suffer fools gladly. Hence his own TV show with a move to East London; which ran from 1955 to 1976.

The Dixon of Dock Green DVD features no episodes from the fifties and sixties, they are all from the seventies when the show's viewing figures were in decline. However with the recent success of Life of Mars, and reruns of The Sweeney, (with a film in the pipeline) the British Seventies Police Drama is still a fruitful market.

The show would begin with a short philosophical monologue by Dixon, followed by the iconic signature tune, and the drama would then unfold. Concluded by Dixon at the end who summarised the events, and closed by Dixon's catchphrase "Goodnight all". 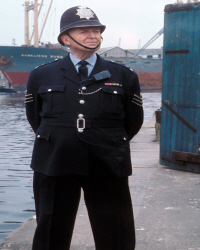 Now, contrary to popular belief, Dixon of Dock Green was not a cosy TV police drama. The first four episodes on this DVD (Wasteland, Jig-Saw, Eye Witness, Harry's Back) are bleak, gritty and powerful viewing. All shots externally were in a barren background, the interior of Dock Green Police Station is dreary, and the then East End of London, in parts, was still derelict after the WWII bombing. A far cry from the development to this part of London we have seen in recent years. The biggest comparison that comes to mind, when viewing these episodes, is the British Film Movement Free Cinema, with gave us such gems as The Loneliness of the Long Distance Runner, This Sporting Life and many more.

The plots do not centre on Dixon, he is merely a supporting character, as his team and Dock Green's CID investigate crimes, lead by the dashing Det. Sgt. Andy Crawford (Peter Byrne). Misdemeanours that entail gangland killing, missing policeman, witness intimidation, serial killers and others. In addition, the victims, the public and the criminal's perspectives are seen. So the viewer gets an overall understanding of the incidents from all angles.

The last two episodes on the DVD are a mixture of studio and external filming, nevertheless still compulsive viewing. It would be a crime not to give Dixon of Dock Green a watch. Moreover, hopefully the remaining forty five (The Beeb taped over the others) episodes will be released, and the BBC might just redeem themselves from tampering with the evidence.