During the current clamour to re-appraise everything from the British sex comedy to the career of Sid James. There is one area of home-grown cinema which has remained neglected by the Sight And Sound, Ross Brothers and the Reynolds & Hearn axis. Namely the school of savage sub-Bunuelian satire which ran from about 1968-73. Lindsay Andersons vigo-influenced If, advocated teenage rebellion in a post-Paris riots culture, Peter Medaks’ The Ruling Class depicted the House Of Lords as a place literally filled with skeletons, rotting corpses and zombies, and Kevin Billingtons’ The Rise And Rise Of Michael Rimmer gave us Tony Blair 25 years before the event.

Many of the films which emerged from this movement were couched as comedies, offering opportunities for the fledgling group of writer-performers who went on to create the likes of Do Not Adjust Your Set and Monty Python. Interestingly, the previous generation of humourists threw themselves into the mix as well, leading to Goon and Oxbridge hybrids such as The Bed Sitting Room. From the music world, The Beatles too were known for their love of lunatic wordplay and offbeat sense of fun, so The Magic Christian stands as an archetypal movie, scripted by Terry Southern. Starring a member of the Goons and one of the Fab Four, and with psychedelia and protest infusing every frame, it couldn’t be much more 1969 if it were wearing loon pants and clutching a copy of Electric Ladyland.

Sellers stars as wealthy and successful business tycoon Sir Guy Grand, taking a vagrant (Ringo Starr ) under his wing and spending the duration of the film proving to his adoptive charge that everyone has their price. It’s a message layered on with a trowel, to be honest, but it does at least lead to many splendid comic vignettes. Spike Milligan does one of his effortlessly insane cameos as a traffic warden who ends up eating a parking ticket, Hattie Jacques takes great delight in acquiring a paperback account of various wartime atrocities, and Sir Guy hits the establishment right where it hurts by sabotaging the Oxford-Cambridge Boat Race. 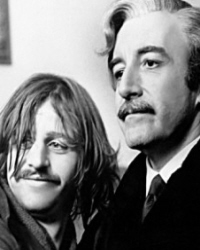 Purchasing tickets for the maiden voyage of new super-liner The Magic Christian, Sir Guy and his companion find themselves entering a whole new level of madness. Dracula poses as a waiter, a sexy chanteuse eventually revealed to be a male megastar in drag chats up Roman Polanski. The captain is carted off by a gorilla, and the vessel is found to be powered by hordes of topless dolly birds enslaved by the whip-cracking Raquel Welch. With the ship ultimately revealed as illusory, Sir Guy finally confirms his suspicions about humanity by filling a vat with shit and urine, throwing a few quid on top and watching as a crowd of city gents immerse themselves in the mire to get their hands on the cash.

Sellers and Milligan indicate that they were years ahead of their time, Badfingers’ Come And Get It and Thunderclap Newmans’ Something In The Air dominate the soundtrack, and while Ringo might not have been the best drummer in the Beatles, there’s little doubt that he was the group’s most talented actor. The Magic Christian, although very much of its era, is a film which is improving with age.
© Words – Darrell Buxton