Filmed as the Thatcher-led Conservatives took power in this country, and at a time when gritty Euston Films productions filled our TV with images of violent and corrupt London, The Long Good Friday is the rawest, most energetic gangster picture since the heyday of Cagney and Bogart. Indeed, while Barrie Keeffe’s screenplay could certainly be described as neo-Shakespearian, the ‘downfall of a mob boss’ concept would be equally familiar to fans of Tommy-gun operas from the rain-soaked Warner Bros. circa 1931. A  matter compounded by the perfect casting of Hoskins in the lead role of Harold Shand -

Part Edward G. Robinson caricature, part pug-nosed British bulldog, Hoskins tears the screen apart with a performance which has remained unequalled in its genre despite the subsequent glut of suits’n’shooters sagas from both sides of the Atlantic. Even in his scenes with Eddie Constantine, the rugged face of b-movies incarnate, it’s the then-inexperienced Hoskins who dominates and grabs your attention by the lapels, yelling Cockneyisms down your ears or pummeling you with patriotic pre-Thatcherite garbage, convinced that his semi-legit proposals for the re-development of London’s docklands will give him total control of his beloved city. Shand is prepared to get into bed with the Mafia, shown here in an extremely businesslike and unromantic light, to achieve his aims. However, while he’s been away in New York fixing up the deals, his henchmen have unwisely embroiled themselves in the shady activities of a local politician and building contractor whose Belfast connections introduce terrorist tactics into the mix. What’s an old-fashioned gang boss to do, suddenly confronted with a whole new set of rules involving corpse-filled ditches, nocturnal kneecappings and incendiary devices? 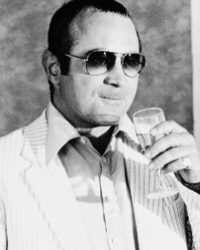 With explosions ripping the guts out of Harold’s ambitious blueprint, the utterly confused Shand employs redundant, orthodox methods to attempt to uncover the truth. His world of back-handers to the Old Bill and after-hours frighteners dished out to underworld rivals appears woefully archaic in the face of Constantine’s determinedly non-Corleone approach (the Yank travels with his stuffy lawyer, for God’s sake) and the controlled mayhem carefully plotted by his new Irish enemies. The film’s celebrated ‘midnight at the abattoir’ set-piece is a grand, elaborate display of Shand’s power, stringing up half-a-dozen of his rivals like so many sides of beef, but ultimately appearing as a pathetic, out-dated gesture which fails to impress even Harold’s pet bent police chief (Dave King).

The Long Good Friday is a searing piece of work, with notable sterling efforts from casting director Simone Reynolds (whose discoveries here included Pierce Brosnan, Gillian Taylforth, and a 13-year-old Dexter Fletcher), cameraman Phil Meheux (providing one or two impact-filled technical shots and numerous superbly-lit close-ups of Hoskins). Composer Francis Monkman whose sax & synth-driven score is one of the most memorable of the era, and female lead Helen Mirren who transforms the traditional ‘gangster’s moll’ into a vibrant, confident figure, performing wonders during the closing scenes as her life starts to fragment and shatter. Not to be outshone, director Mackenzie climaxes with a final shot which deserves to enter the annals of movie history, a daring 75-second close-up during which Hoskins delivers an acting tour-de-force, replaying the entire tragic tale across his twitchy, anxious features while being led to his uncertain fate.